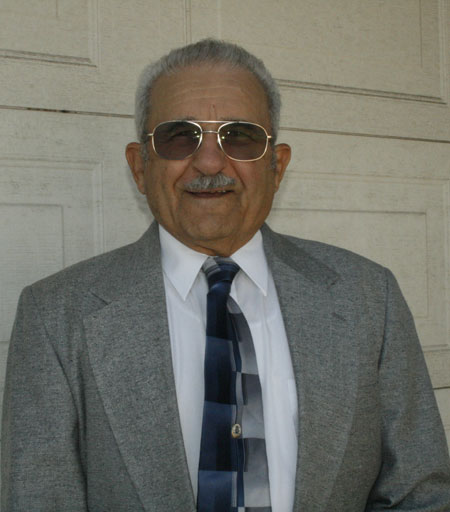 A Santa Clara resident for more than half a century, Figueira is known throughout the city for his generous volunteerism.

A founding member of the Santa Clara Sister Cities Association (SCA), Figueira served as board president for 20 years. His dynamism was so influential in the SCA’s success, that when Santa Clara’s Portuguese sister city, Coimbra, named a street for the city of Santa Clara, there was no question that Figueira would be the city’s official representative at the event.

Trained as an electrical engineer, Figueira graduated from Cal Poly and worked for 31 years at Lockheed Missiles and Space. He and his wife Lorraine have been married for 55 years and have five children, eighteen grandchildren and seven great grandchildren.

As impressive as his contributions to the SCA are, Figueira’s boundless energy made its mark on many other community groups as well. A Korean War veteran (1951-1955), Figueira belongs to American Legion Post 419 and has played a key role in the USS Talladega APA208 crew’s annual reunion for two decades.

Declared the winner of the 2009 California Pioneers Essay Contest, with the text of his own “The Rose of Portugal”, part of the anthology Ageless Reflections of Muses, published in California for a few months has also taken a lifelong interest in the important role of Portuguese immigrants to the Santa Clara Valley.

He’s belonged to the Portuguese American Club since 1968, serving for 20 years as a board member and club historian. As a charter member of the Portuguese Heritage Society of California since 1993, Figueira designed and helped construct the museum building in San Jose’s Kelly Park – he played a central role in designing and constructing the plaza artwork that illustrates the many discoveries of Portuguese explorers. In 1995, Figueira joined the Portuguese Chamber of Commerce of California.

Figueira’s creative talent won him the 2009 California Pioneers Essay Contest for his piece, “The Rose of Portugal,” which was published in the anthology “Ageless Reflections of Muses.”

“Whether volunteering on non-profit boards, helping construct the blockhouse for the El Camino Little League, or facilitating student exchange programs for our Sister Cities Association, John has selflessly given to our community and made Santa Clara a better place.”

Figueira will be honored for his community contributions at the upcoming Mission City Community Fund dinner on Nov.5, 2011.

Founded in 1986, the non-profit Mission City Community Fund dedicates itself to improving quality-of-life in Santa Clara. Over the last quarter century, MCCF has given away over $1 million to a roster of community and service organizations that includes arts groups such as the Triton Museum and Mission City Opera, human services agencies such as Bill Wilson Center and the YWCA, and educational efforts such as the Montague School Science Camp and the Library Foundation’s Read Santa Clara program.

Each year, the Warburton award recognizes an individual or organization exemplifying the spirit and character of Mission City Community Fund founder Austen Warburton. An attorney, civic leader, educator, historian, and philanthropist, Warburton’s many community contributions were cornerstones for making Santa Clara an even better place to live.

Bikram Yoga Practitioners Sweat It Out in Santa Clara