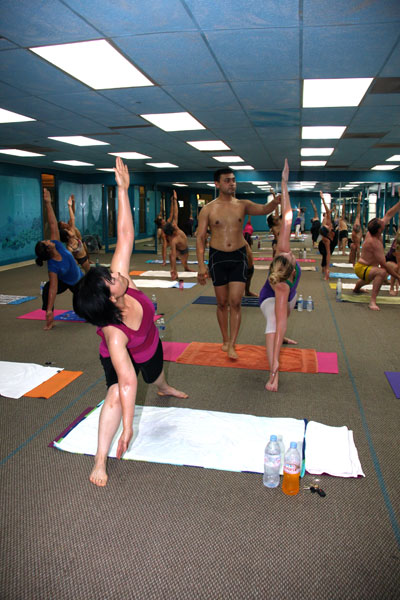 “Sweat it out” takes on new meaning at the ten-year-old Bikram Yoga studio in Santa Clara, where about 140 yoga practitioners wouldn’t dream of missing their daily, 90-minute workouts in a 1,200-square-foot room heated to 105 degrees with 40% humidity to relax the muscles.

The steamy routine is the same every day: two breathing exercises and a systematic sequence of the exact same 26 essential Hatha yoga postures to stretch and strengthen the body. Each certified Bikram Yoga instructor even repeats the same words of direction, ensuring uniformity in training.

“Anything you do the same, you get better and better. If your posture improves, your health improves. Yoga helps with stability and circulation. It helps you to de-stress,” says Abhinav Sagar, Bikram Yoga Santa Clara manager and instructor.

“Everybody should do yoga. You can do yoga all your life, and it’s never too late to start,” says Sagar. “Grandma does better than granddaughter. Grandma is more focused.” However, because Bikram Yoga is strenuous, Grandma—or Grandpa— is advised to check with the doctor before working out at 105 degrees.

“You don’t come planning to be dedicated for the rest of your life, but yoga becomes very important, and you find that you need it for peace of mind and to keep your body calm and centered,” says Navin Pola, Bikram Yoga Santa Clara franchise owner. Breaking from his Silicon Valley engineering career, Pola opened the studio at 1500 Norman Avenue in July 2001.

“Yoga is badly needed for the stress people are going through, for long hours and sitting in front of a desk. Young people have 50-year-old bodies, bending forward all day without backward balancing,” says Pola.

Bikram Yoga student Clyde Matsusaka may hold the Santa Clara record with 1,000 days straight of workouts on the mat.

“If I travel, I still make sure I do Bikram yoga,” says Matsusaka. “If a place doesn’t have a studio, I don’t go there,” he jokes, adding, “It’s like going to a gas station because you fill up your tank.”

“It’s my best vacation. Every day I come, I learn to focus on what I’m doing. It’s changed my life,” says Polly Iamiceli, who started doing Bikram yoga in July 2010 after the death of her husband. “Once you start, you want to keep coming, even holidays,” she says.

The celebrity behind Bikram Yoga (www.bikramyoga.com) is Bikram Choudhury from India, where, of course, any yogi worth his mantra is from. Born in 1946, Bikram arrived in San Francisco in the early70s and taught his hot yoga in a little studio next to the Marina Safeway.

After a year, Bikram moved to Beverly Hills, where he found his niche and hit his stride, opening a yoga college in Los Angeles, eventually patenting his yoga routine, and becoming a multi-millionaire. The worldwide yoga franchise developer likes to call his yoga the McDonald’s of yoga because it is spreading everywhere, blending spirituality and capitalism to everyone’s advantage.

“This is so healing and powerful that I haven’t tried other styles of yoga,” says Joanne Warrilow, who started practicing Bikram yoga in 2003 after a car accident.