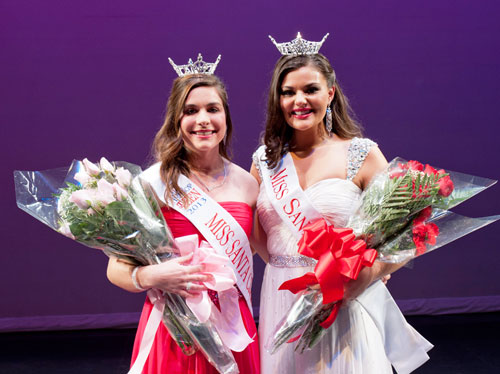 As a mother of two college students, Mary McCaman, executive director of the Miss Santa Clara Auxiliary, knows how expensive it is to pay for a college education.

According to Tony Moises, an interview coach and a volunteer with the auxiliary, a total of $25,000 has been given to the participants of the Miss Santa Clara/Outstanding Teen and Miss Silicon Valley/Outstanding Teen scholarship competitions this year.

“It’s important for the ladies to take something positive from this experience and use it for later in life,” Moises says.

Molly Crawford definitely took something positive from her experience at the Miss Santa Clara/Outstanding Teen pageant that took place on Saturday, January 5th at the Mission City Center for Performing Arts. She won the title of Miss Santa Clara 2013.

“It’s so awesome to hear my name after all the hard work I put in,” a beaming Crawford says in a flowing white gown while wearing her new sash and tiara. “Being a former Miss Santa Clara’s Outstanding Teen, I get a chance to do what a former [Miss Santa Clara] did for me, which is to be a mentor.”

A student at DeAnza College, Crawford’s interests involve Operation Beautiful and Beyond Beauty for Girls, two organizations that promote healthy self-esteem for women.

During the pageant, Crawford danced to Wynona Judd’s “Burning Love” in a red halter dress.

“It was spunky and sassy, and the best I’ve ever danced on this stage,” says Crawford, who has been dancing ever since she was five years-old. “I love to perform, to be in a room and just let go.”

Other highlights from the Miss Santa Clara competition included Marisa Andrade’s sizzling Latin dance number, Steffi Huynh’s hip-shaking Fijian dance, and Lynn Nguyen’s speed painting of a face during the length of a song. For the on-stage question segment, Regina Fields revealed that she believes in recognizing globalization and that she is learning French, and Reina Stevens shared that her passion is dancing. During the evening wear segment, Angela Esquibel wore a cherry red strapless gown and Cathy Vu wore a pale blue gown with gem accents.

Krista Buzolich, a freshman at St. Francis High School, was crowned Miss Santa Clara’s Outstanding Teen 2013. In her rose red evening gown, Buzolich was all smiles after the pageant.

“I was really surprised and so happy,” Buzolich says of how she felt when she learned she had won. “This is my first time competing.”

The winner of the interview award, Buzolich says she worked on her interviewing skills before the pageant by practicing with others. For the talent segment, she had performed a jazz dance.

“My platform is about promoting volunteering at a young age,” says Buzolich. “I really want to go to different schools and teach young kids about going out into their communities to help people less fortunate than them.”

Buzolich volunteers at the local animal shelter and has also volunteered at her parish during Christmas, Thanksgiving, and Easter.

Other highlights of the Miss Santa Clara’s Outstanding Teen competition included Caroline Monahan’s fancy footwork in an energetic jazz dance, Kimberly Vernon’s jumps and kicks in an upbeat ballet dance, and Cheyenne Martin performing a melodic trumpet solo. For the on-stage question segment, Alexis Chavez voiced her approval of electronic media use for educational purposes while condemning its use for cyberbulling, and Tiah Esquibel talked about how the recent tragic school shootings in Connecticut affected her.