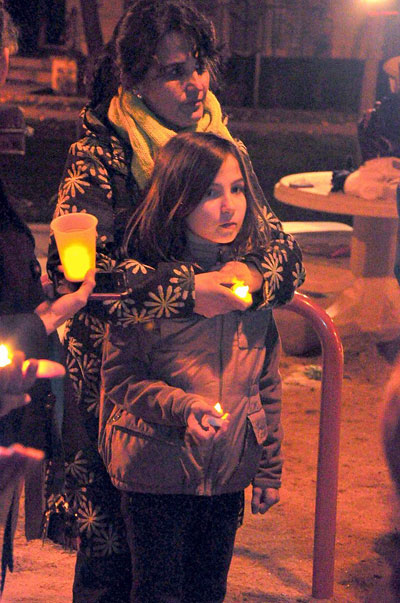 It was a cold, frosty night. The air was crisp and redolent with the smell of candle wax. On December 19, people from all over the Bay Area gathered at Live Oak Park in Rivermark at an emotional candlelight vigil to honor the victims of the Sandy Hook Elementary School tragedy.

Organized by South Bay residents Harbir Kaur Bhatia, Jaya Gautam, and Kathy Watanabe, the event was a forum for people to share, grieve, support, help each other deal with the tragedy, and be a comfort to others.

More than 60 mourners from Santa Clara, Sunnyvale, Cupertino, Milpitas, Fremont and Pleasanton gathered in a children’s play area as the names of the 26 victims of the Sandy Hook School shooting were read out aloud.

“Pain has been felt by people throughout this nation,” said Bhatia. “They are children of the whole family that is America. Each of us must take action to prevent such violence, and instead create a safe future. Whether it’s focus on gun laws, the family unit, or mental health, it’s everyone’s responsibility.”

Watanabe asked everyone to “commit 26 random acts of kindness in memory of the 26 victims in the hope that by everyone taking part and paying it forward, good can one day triumph over evil.”

“We need to mourn the children and teachers of Sandy Hook,” said Gautam. “Each one is an irreplaceable part of our lives now, but we should not lose our faith in humanity and in each other. Remembering the heroic acts of the teachers as they tried to save their students should be our inspiration as we make our community, our nation stronger.” She also read a poem in memory of the victims, “Hard to Believe.”

Pastor Jack Treiber of North Valley Baptist Church and Kent Litzau of South Bay Church led the group in prayer and expressed how hard it was for people to understand what happened. Jessi Kaur, children’s book author and founder of In Global Synergy Now, representing the Sikh faith, addressed the crowd about the importance of ending gun violence and supporting each other as a nation.

Santa Clara Mayor Jamie Matthews emphasized the importance of love of family and children. San Jose City Councilmember Kansen Chu shared how he is working on a gun buyback program. A Rivermark mom spoke from her heart when she shared the story of losing her son in 2008. She expressed the overwhelming love and support the family experienced while her son was hospitalized. Expressions of support, no matter how small, she said, will help uplift and heal not just these families in Newtown, CT but future generations as well.

Aparna Gulati and Pratap Whig were at the vigil with their two young children. “We can’t bring back those little ones. We can’t even fathom what their loved ones are experiencing. But we sure can send our prayers, our love and our positive wishes to them while attempting to resurrect our own faith in the goodness of humanity.”

Deeply affected by last week’s tragic shooting, Kiran Chadha and Himanshu Singh, who helped set up the vigil, said they were happy to help.

The first responders – the police and other emergency personnel who are on the scene first in any emergency – were represented by the presence of the Santa Clara PD.

At the vigil, adults and children were encouraged to express their feelings by signing or drawing on a large canvas. Children can find it difficult to comprehend the tragedy, especially since the victims were school age children. At the vigil, children wrote notes of encouragement, drew pictures, and made cards to express their feelings through art.

Stuffed animals, books and other toys were also collected to be donated in the name of Sandy Hook Elementary School to Toys for Tots and the Make-A-Wish Foundation.

There was a sense of sharing and a community coming together to support another community almost 3,000 miles away. “We will remember, we will not forget, and hopefully, we will learn how to prevent another tragedy like Newtown from happening again,” said Watanabe.