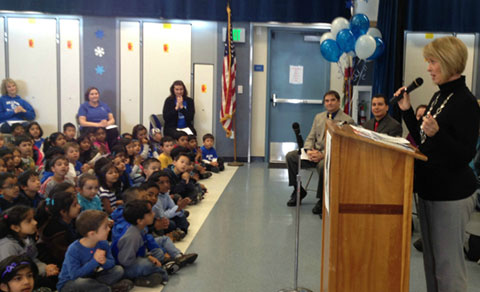 On March 20, the students at Millikin Basics+ Elementary School wore their blue and white Mustang spirit shirts to show their school pride as they gathered in the cafeteria for an assembly.

“Today we recognize our 2012 National Blue Ribbon Award,” announced school principal Dr. Melba Rhodes-Stanford. “The Millikin program started in 1976. We have some outstanding teachers who built this from the ground up.”

In addition to celebrating faculty members in her speech, Rhodes-Stanford also recognized the efforts of the students, parents, and school and district staff. Superintendent Bobbie Plough also spoke at the event and told members of the school to give themselves a pat on the back. Members of the Santa Clara Board of Education and retired staff and faculty also attended the celebration.

“Being here brought back memories and the pride that comes from being part of a school that’s so outstanding,” said Doris Britschgi, a retired fourth grade teacher from Millikin School.

At the assembly, students viewed the National Blue Ribbon flag and plaque and heard their peers sing the school song. After the assembly, teachers led their students outside as a representative from each classroom attached a blue ribbon to a tree.

The teachers enjoyed a luncheon and cake. Students got free Jamba Juice for the extra boost of energy while they played during their extended recess. Due to the forecast for rain that day, the family picnic for the students was rescheduled to May. 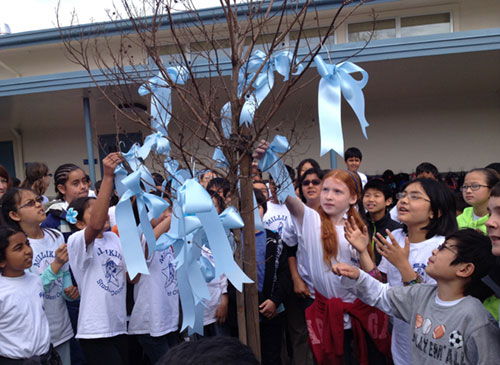 According to Rhodes-Stanford, the United States Department of Education announced last fall that Millikin School was selected for the National Blue Ribbon Award based on the school’s record of showing academic achievement among its students.

In November, Rhodes-Stanford and one of the school’s teachers traveled to Washington D.C. to attend the National Blue Ribbon Ceremony. Here, representatives from 250 public schools and 50 private schools nationwide received the award. Although Rhodes-Stanford didn’t meet President Barack Obama, she said that Arne Duncan, the United States secretary of education, came by to congratulate the winning schools.

When interviewed, Rhodes-Stanford and other school and district staff members took the time to dispel certain notions some community members might have about Millikin School.

“Families who value this kind of program are families who place education as their number one priority, regardless of what their socioeconomic status is,” Rhodes-Stanford said. “The students here have a strong work ethic.”

“Our program is important for those who want a formalized structure for their children’s education,” said Chris Preece, a fifth grade teacher who has been teaching at the school for the last 28 years.

“The process for admission at Millikin is random; it’s done through lottery by state law,” said Michele Burchfiel, director of human resources and administrator for open enrollment at the school district. “The only priority is given to children who already have a sibling at the school. Otherwise, [getting admitted] is just the luck of the draw.”

A Decade of Honoring the Arts at Santa Clara High School