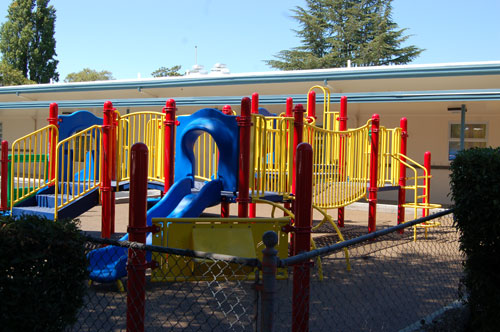 The afternoon sunshine cast a cheery light on all the people walking around with Ben & Jerry ice cream cones in their hands. No, they weren’t attending the county fair. An ice cream social and ribbon cutting ceremony marked the opening of the new Millikin Basics+ Elementary School campus on August 17. The event drew about 300 attendees, many of whom were city council members, school district staff, community members, parents, and students of the school.

At the event, Melba Rhodes-Stanford, principal of Millikin Basics+ Elementary School, welcomed the attendees and recognized her staff and the departments that made the grand opening of the new campus possible. Bobbie Plough, superintendent of the Santa Clara Unified School District, shared her excitement over the new location for the school. Larry Adams, director of the district’s school bond projects, thanked the architects who helped to remodel the new school.

The rising number of parents who wish to place their children in Millikin Basics+ Elementary School prompted the school’s move away from its former Sonoma Place location to a bigger campus on Hobart Terrace.

“Millikin moved from its former site at Central Park to here,” Plough says. “We have a lot of demand for our basics plus instructional program and this campus was large enough for us to expand here.”

“This is the start of the next generation of students at the school site,” Adams says. “I had to work with the principal and staff of Millikin School to find out what the school needed and to communicate that to the architects. The architects drew the plans and we hired the contractors to do the construction.”

On a walking tour of the campus, the pristine exterior and interior space, occupied by new furniture and carpeting as well as fresh pavement and paint, offers a visually pleasing picture. Ensuring that students here would have access to the newest technology, administrators purchased a projector, at least one computer, a video and DVD player, and a document camera for each classroom. The library comes with a teaching wall, student chairs and desks, and an abundance of books for pleasure reading and research.

The new Millikin Basics+ Elementary School was formerly Mariposa School, established in 1956. Mariposa School later closed due to declining enrollment, and then was rented out to another educational institution before the school district reclaimed it for the site of the new Millikin campus. While the old Millikin campus held 402 students last year, 432 students will occupy the new campus for this coming school year.

“I feel excited and invigorated today,” Rhodes-Stanford says. “I feel we have a gift given to us. The parents are so thankful. They’re marveling at the technology of the school and how beautifully constructed the classrooms are with the lights and high ceilings. This event was a good way to introduce ourselves to the community.”

“It was exciting to see so many facets of the Santa Clara community today,” adds Kristi Pierce, a first grade teacher at the school. “I look forward to using [the new classroom technology] with my students this coming year.”