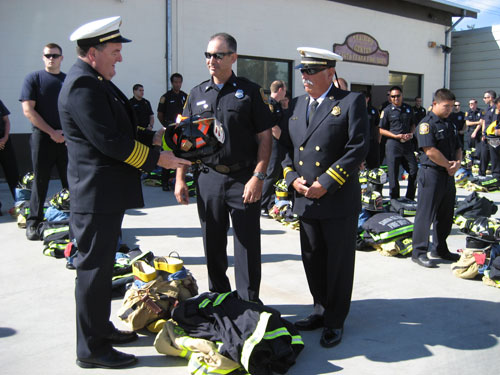 The volunteers had assembled at the fire department training center on Walsh Avenue September 8 for the Annual Chief’s Inspection of their personal protective turnout gear—$2,500 per person worth of boots, hood, helmet, pants, jacket, goggles, gloves, hose strap, metal spanner, and even sturdy suspenders—all on loan from the city.

“I want to thank you for your professionalism and dedication to this profession,” says Kelly, himself once a volunteer, to the men and women smartly dressed in navy blue uniforms.

“Under my 25 years, I’m most proud of the number of volunteers,” says Volunteer Reserve Division Battalion Chief Kent Clerk. “All are well-educated, well-groomed, and well-prepared. One of my proudest moments is when I hear from other fire departments how good our whole department is and how well-trained our volunteers are.”

Aulii Ellis, in the most recent training class, and Shannon Riley, who made lieutenant in a year and a half, are the only two women in blue out of more than fifty volunteers (compared to about 130 paid Santa Clara firefighters).

At the September 13 badge-pinning ceremony, volunteers Dave Stiver and Mike Martin will be awarded the rank of chief, serving under Clerk. Martin considers his service a two-fold benefit.

“I’m giving back to the community—and I don’t have to go to the gym. I come here to train on Saturdays,” says Martin.

“You might consider something a little wrong with somebody who’s running into a burning building while everyone else is running out,” says Clerk, “but we help people on their worst day, and we do it just for the satisfaction.”

“Most problems in fire fighting are little things that happen, like when suspenders break,” cautions Clerk in a last word to the firefighters after their gear has passed inspection. Then everyone heads off to start a fire—at the annual volunteer barbecue.