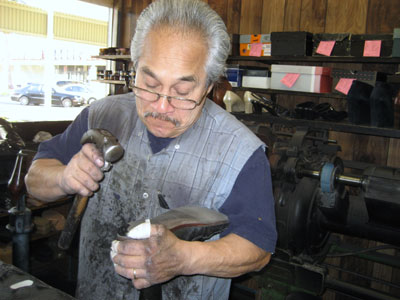 “I don’t plan to stop until the Lord done call me,” says Manuel Leyva, a man who loves his life’s work. A good cobbler—actually any cobbler—is hard to come by, so it’s reassuring to know that Leyva, who opened Manuel’s Shoe Repair in Santa Clara in 1978, is no quitter.

“When I first came here, I had black hair, I didn’t wear glasses, and I wasn’t a grandfather,” says Leyva. “The business fell in my lap. I grew up in San Jose, and our neighborhood shoe repair guy was such a nice person and treated people so well. He asked if I wanted to learn, so I did. I was 14 or 15.”

“The moment I got behind the counter, I fell in love with the job,” says Leyva, a Vietnam War veteran. “I like dealing with people and working with my hands.” After discharge from the Marines, he got a G.I. loan and started his own shoe repair business with his wife, Terry, whom he had met while stationed in San Diego.

“I was scared in the beginning. You wonder how you’re going to do,” Leyva says. It was during the electronics industry boom of the ’80s.

“But things boomed for me, too. And are still booming,” he says. Leyva figures his competition has dropped by about a third as older cobblers have retired.

Santa Claran Ann Eldhose dropped by to pick up a pair of repaired spike heels and drop off the ones she was wearing. A friend had recommended Leyva’s shop a few years ago.

“I like to keep my shoes as long as I can—it takes a lot of effort and pain to break them in,” says Eldhose. “And Manuel does beautiful work. He restores your shoes, makes them look even better than when you bought them.” Leyva also repairs leather boots, jackets, purses, belts, wallets, and suitcase zippers. He has sewn zippers in tents and repaired the airbags of leaf blowers.

“There’s always something different. You don’t get bored. Anything I can get in my machine, I can do,” he says, referring to his 30-year-old Singer patching machine. He repairs his machines himself, hunting down no-longer-made parts in the garages of retired cobblers.

Don’t worry about the “bandages” on Leyva’s thumbs and fingers. Wrapping them in masking tape is one of his tricks of the trade to prevent glue and chemicals from damaging his skin.

“Manuel is a skilled cobbler. He cares about the quality of shoes and likes what he’s doing. He’s always smiling and laughing with customers,” says Jose Martinez Jr., who had his shoes shined for a wedding.

“You’re not going to be a millionaire in this business, but you’re going to make an honest living. People tell me they’re really glad I’m around. People want to make things last longer, especially in this economy,” Leyva says.