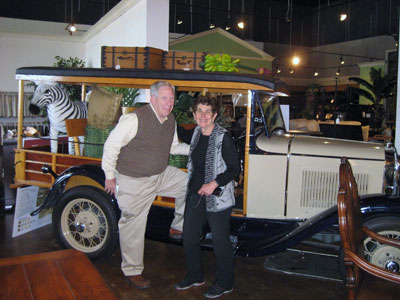 Raising two daughters and celebrating 53 years of marriage is a noteworthy accomplishment. Add in devoting 47 years of that marriage to building a premier furniture business together in Santa Clara, and it becomes the unique love story of Eleanor and Richard Russell of Russell’s Furniture.

Eleanor is the love of my life, says Richard, a mid-westerner who goes by the business name Russell, rather than his real Hungarian family name.

Russell’s Furniture, 2645 El Camino Real, has catered to the custom furniture market since 1965, but Richard’s grandfather began the families first furniture business in Chicago in 1892. That business, eventually taken over by Richard’s father, is where Richard learned the ropes. His hard work impressed a business contact who later enabled him to go west and, independently of his family, begin his own business.

You never really work for somebody. You always work for yourself and your reputation, says Richard.

We came here just as the valley exploded. No amount of planning replaces dumb luck, says Eleanor. However, she adds, luck is when opportunity meets preparation.

We hit a homerun when we landed in Santa Clara. I can’t believe the competency of everything in this city—from the cost of doing business to the professionalism of the police, the fire [department], and the city itself, says Richard.

n 1985, Russell’s Furniture was voted the number one furniture retailer in America by the National Home Furnishings Association, and the award was given jointly to Eleanor and Richard. It was the first time a woman received the award. Eleanor, originally a New Yorker, is in charge of the day to day business details, including staffing, the office, and payroll. Richard heads merchandising, advertising, and long-term planning.

Russell’s has been called the Winchester Mystery House of furniture. Wear your walking shoes and take your GPS to navigate the store’s almost 70,000 square feet of furniture displays, representing some 250 furniture manufacturers and vendors. And that’s not to mention Russell’s 54,000-square-foot Santa Clara warehouse or its outlets in San Jose, Dublin, and Newark.

Our pride is our quality. We specialize in better-end buys at a good price, says Richard.

We are opportunity buyers, always looking to take advantage of manufacturing closeouts or overstock, says Robert Bauer, general manager since 2003.

We specialize in giving people what they want, Bauer says. And being a family business, we’re nimble. We can mark down a piece to move it and make room for new product on the floor.

With custom furniture, what you see is just one of many possible variations. The headboard style of a bed can be changed. A footboard can be added. A sofa can be made with two or three cushions, skirted or unskirted, with a back that is semi-attached, loose, or tight.

Don’t worry. You’re not on your own when you shop here, says interior design specialist Bill Sherman. You tell us what you’re looking for and what your needs are, and we can show it to you in multiple different ways at different price points.

With the new home market slow, Eleanor says the current market is for replacement furniture. One trend for the aging population is towards comfort furniture such as sofas with reclining seats and chairs with electronic lifts.

Here in the Bay Area, you run scared and work as hard as you can because you never know what will happen. Never take success for granted, says Mr. R, who at 75 still often works at the store six days a week—with the love of his life behind the scenes in the office.

Business
Author Erika TownePosted on February 18, 2021
It is now easier for you to gain access to the restaurants at Westfield’s Valley Fair, even during COVID-19. The company has teamed with...