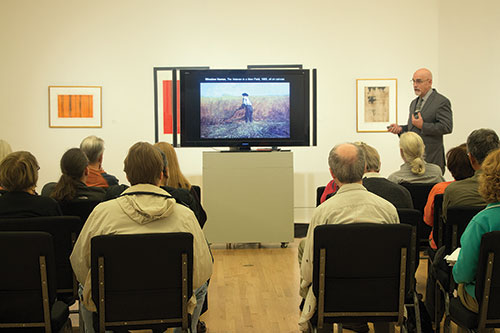 Art has long been a reflection of society. Historians can look at artistic endeavors and use them as a tool to uncover the world we lived in at the time. American art has also followed this path, and in a six week lecture, “America: A History in Art,” the Triton Museum of Art’s Chief Curator Preston Metcalf delved into the details and events that helped shape American art.

On Mar. 9, in the second of the series, Metcalf discussed the westward expansion, and how Manifest Destiny played a part in the way art was created and developed.

“Five things happen that truly affect our art,” said Metcalf. “The first happens towards the latter part of this century and that is the Civil War. The Civil War had a major impact on our nation. “

The other things, said Metcalf, were the embracing of three movements and one rejection of artistic expression. The first of the three was the desire for artists to start portraying America for what it was, notably seen in the artwork of John James Audubon, who created 435 paintings of 447 species of birds after feeling as if no one had documented America artistically.

Next, Metcalf said, was the presidency of Andrew Jackson – the first populist president.

“The populist movement had a major impact on the art that was being produced,” he said. “Everything now was about the downtrodden people – about the people who came out of the woodwork, the common folk.”

Manifest Destiny became the driving philosophy of America with the ideas that “we are exceptional, we are superior to everyone else and we hold the moral high ground,” said Metcalf. This seemingly pretentious American mentality led to America’s attempt to eradicate Native American art, which was successful, as indigenous art was not embraced in American again until the 1960s.

Part of the movement encompassed the portrayal of self-reliance in art. “Every one of these [landscape] paintings has a lightly blasted tree,” said Metcalf. “Why? That’s the transient of life. That’s what we should really be concerned about … This is the transcendental response to religious revivalism … We look at these as landscapes, but they are not simple landscapes. These are philosophical statements and the people looking at these knew it was a statement.”

America: A History in Art continues on Thursday, Mar. 23. Drop in fee is $20. For more information, visit http://www.tritonmuseum.org/education_adults_arthistory_spring2017.php.

A Showcase for Special Talents