Adiona is made from simple materials, including a suitcase, a wooden desk created with a laser cutter, hinges, screws, cork, toilet paper rolls and Pringles cans. This product is intended to be a workspace for foster children who might move from home to home. According to Ruby, 450,000 children and teens are part of the foster care system in the United States.

“Inside the suitcase is a desk that unfolds and can be set up for work atop your suitcase, a storage area so you can carry around your notebooks, and section containers so you can organize your learning materials, such as your colored pencils and rulers,” he said.

Ruby explained that Adiona is a Greek goddess known as the protector of children and people traveling home.

“Our project is meant for kids in school and kids trying to find their way to their forever home,” Ruby said. “So, we thought Adiona was a fitting name for our project.”

Ruby also consulted with a social worker for feedback regarding her team’s design of the workspace.

“She reminded me that in a lot of homes where these kids were staying, they might not have a lot of room,” Ruby said. “She said it would be helpful if the kids using Adiona can modify the size of their desk or workspace. 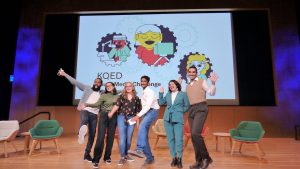 “We had to work in an assembly line,” Ruby continued. “I did the first prototype. Grace added the iterations and changes. Om did our testing.”

“We came up with different designs for the folding desk, including a 3D model and several sketches,” Muresan said and then showed how she rethought a design. “When the actual materials arrived at my house, I realized it wouldn’t work, so I had to improvise and reiterate our original design. I figured out ways for the pieces to fit so that it would hold the weight together, which our criteria required it to hold. I used hinges and it took me a while to put all the screws in.”

Kulkarni talked about the three tests the workspace underwent.

“We tested the amount of time it took to put together the entire prototype and disassemble it,” Kulkarni said. “Since foster kids move around a lot, the second test involved portability. We tested that by lifting the workspace, shaking it, rolling it, spinning it and opening it up to see how much displacement occurred.

“The last test was the weight-bearing test of the actual desk,” Kulkarni continued. “We used weights from my dad’s personal gym and we found that our workspace can hold up to 135 pounds.”

Earlier this year, Ruby, Muresan and Kulkarni submitted their project to Engineering for Good, part of KQED’s Youth Media Challenge. On Nov. 10, KQED aired “I Made This: A Youth Media Celebration” where this team made an appearance.

Pomeroy Turkey Drive Back in Action