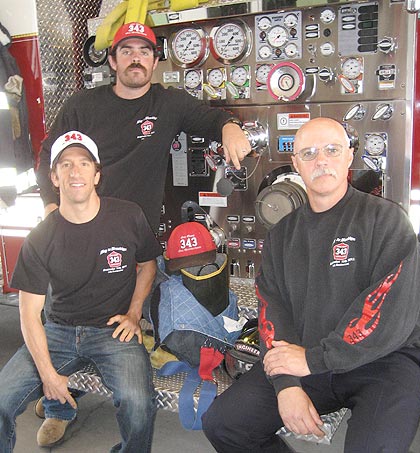 No one can fill the boots of the 343 firefighters who lost their lives on 9/11/01 in the aftermath when al-Qaeda terrorists crashed two commercial jet airplanes into the twin towers of New York City’s World Trade Center. Three local firefighters, however, will honor their memory by riding their bicycles 4,000 miles from Santa Clara to New York City. Their arrival at Ground Zero is planned for 9/11/11, exactly ten years after the suicide attacks that claimed nearly 3,000 lives.

A Santa Clara firefighter for 21 years, Darrell L. Sales, Sr., originally planned to ride his Harley Road King Classic to New York. When his son Darrell Dean Sales, Jr., also a trained firefighter, said he would ride his bicycle there, Sales, Sr., decided to dust off his own bicycle and pedal with his son.

“The cause, the challenge, and the friendship” motivated Santa Clara firefighter Dave Lombardo to join the father and son in their off-duty adventure. “What an opportunity to memorialize 9/11 and the 343 who lost their lives! Plus, it’s a crazy ride,” says Lombardo.

Lombardo had just graduated from the Santa Clara County Joint Fire Academy when the 9/11 tragedy occurred, a somber beginning to his career.

“It could have been us going into those buildings,” says Lombardo. In the aftermath of 9/11, one member of his class of 17 new firefighters resigned.

“What happened in New York City could easily have happened here,” says Sales, Jr., a laid-off firefighter from another city.

Between now and the firefighters’ August 2 departure, Sales, Sr., will go on training rides, such as a recent 200-mile roundtrip overnight to Paso Robles. The riders will cover 82 to 133 miles a day—3,995 miles total—on their 39-day ride east. Retired Sunnyvale fire mechanic Fred Belligan will accompany them in a support vehicle.

Along their route, they will stay with local firefighters and their families to cut down on their road expenses and build relationships with other firefighters.

“They want to open doors to you. That’s the kind of brotherhood it is,” says Lombardo. Nowadays that brotherhood also includes women. Of the 133 paid Santa Clara firefighters staffing the city’s ten fire stations, eight are women.

“Bay 2 Brooklyn 2011 is about all of us bonding together. Regardless of what happens to budgets and cut backs and the division it can cause, when the bell goes off, we will still get the job done. We serve the community; it’s what we are called to do,” says Sales, Sr.

“I have a personal goal to grow Better Things to a national level,” says Sales, Sr.

For information about the firefighters’ Bay 2 Brooklyn 2011 bike ride across America, visit their website:  www.bay2brooklyn2011.org/. Support their ride and the causes they are fund raising for by purchasing logo apparel, making donations, and attending fund-raising events.

“It’s a cool adventure as well as a way to remember what happened on 9/11. We’ll be able to see America in a way not a lot of people get to see it,” says Sales, Jr.

Public Safety
Author Erika TownePosted on October 25, 2022
A routine patrol early this morning by a Santa Clara police officer kept thieves from running off with a “significant” amount of firearms. Santa...