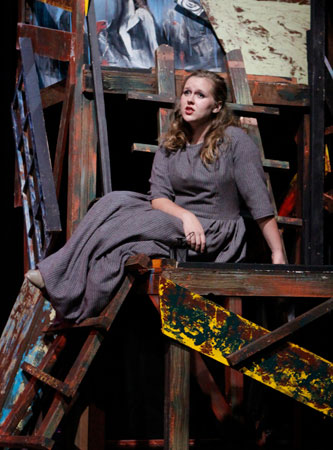 Starting Arts has been producing live theater for over 10 years. During that time, they have put on shows that were both memorable and challenging. And while some organizations aim high, but are satisfied “coming close” to their goals, this is not the case with Starting Arts’ recent production of Les Miserables, which saw a short, three-day run at the Santa Clara High School Performing Arts Center.

“Les Misearables” translates to “The Miserable Ones.” The musical follows the story of Jean Valjean (performed by Jeremy Scharf of the Toulon Cast and Darrell Hubbard of the Montreuil Cast): A caring brother who is arrested and sent to prison to work on a chain gang for five years for stealing bread to feed his starving sister and her family. After serving a 19-year sentence, he is paroled, only to realize the law requires him display a ticket of leave, which condemns him as an outcast in society. About to go back to his old ways, he is caught stealing from a friendly bishop, who, instead of turning him in and sending him back to the chain gang, gives him another chance. Valjean takes that chance and within eight years becomes a successful businessman.

According to the show’s Director, Stephanie Maysonave, “Les Miserables is…about good versus evil, right versus wrong, [and] hope versus despair. It’s about a society where individuals with no money have no hope of escaping their poverty. It’s a story about love…. It’s about second chances and change.”

Starting Arts has a winner here. The cast is made up of members of the Dream Team. The singing is amazing, including a memorable performance by Kelly Rosales, who plays Cosette (from the Toulon cast). And the acting is first rate, as usual. Many of the actors have become familiar to anyone who has followed Starting Arts over the years. But what is even more impressive is the actors’ growth. As they mature and their talent becomes more refined, the shows become that much better. These actors include: Willem Bowman (part of the Ensemble with the Toulon cast), Joshua Bennet (one of Gavroche’s Gang Members), Khoi Le and Emil Schneiderman.

Produced by Michael Boston, Les Miserables is another shining accomplishment and feather in Stating Arts’ cap. And, even though the chances to see Les Miserables ended on June 3, there is still time to plan for the next production. Starting on July 12, Starting Arts will run a three-day performance of Footloose, also at the Santa Clara High School Performing Arts Center.

Starting Arts is a Santa Clara-based non-profit, theater group that is quickly becoming well known in the South Bay for their outstanding work with young performers. For more information on Starting Arts, visit www.StartingArts.com.

Arts & Entertainment
Author Diane AndrewsPosted on March 26, 2014
The winter concert of the Santa Clara Chorale’s 52nd season, “Ages of America” was an eclectic songbook of choral and solo pieces by American...

Arts & Entertainment
Author Melissa McKenziePosted on February 6, 2013
Dreamlike paintings surround the rotunda at the Triton Museum of Art. The details in the images aren’t crisp, but the subjects are still very...

Arts & Entertainment
Author Diane AndrewsPosted on March 7, 2018
Santa Clara Chorale Artistic Director Scot Hanna-Weir’s selection of music for “We, The People” is a stirring tribute to the diversity of America. The...
SPONSORED