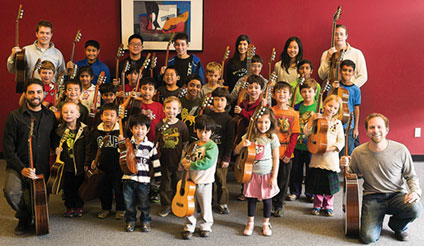 What if learning guitar came as easily as learning your first language – if the ability to play became second nature? It can be at The California Conservatory of Guitar, a Santa Clara-based school that employs the Suzuki method of teaching.

“The general idea is it is for younger kids and you teach music as if it was a language,” said Robert Miller, who co-owns the school with Chris Mallett. “There are some things that differ this method from traditional methods. In a lot of places, the kids are taught to read music right away, whereas in this method they’re taught by ear and they’re taught with the help of their parents. If you think about the language that you spoke at home with your parents, you would start to pick it up…So, it’s environmental learning in a way. The parents come in for a couple of classes before the kids start and they learn a little bit of guitar, which brings the guitar into the household and makes the kid really curious about the instrument. Then they attend the lessons and help the kids practice at home…When they do their first task on the guitar they get a lot of positive reinforcement and it makes them want to do it again…The students are always given really small, easy tasks that they can do that builds their confidence and then those tasks or skills are built upon.”

“They come for private lessons but those lessons are supplemented throughout the year with group classes because music is a social thing,” he continued. “The kids get to come and play music with other kids. We play games that involve music and the older kids they have ensembles that they participate in. There are also a couple of recitals throughout the year here at the school and in the spring semester we have a huge spring concert.”

“The one thing that we try to keep up in our school is that the instructors are also performers and that way they’re able to really encourage the kids,” added Mallett.

While the conservatory focuses mostly on the Suzuki method, including the use of private lessons, of teaching youth guitar, the five instructors teach traditional lessons for older students and adults. Students at the conservatory have won prizes at the GFA Symposium, Sierra Nevada Guitar Competition, Pacific Music Society String Competition. One student, Sean Keegan, placed fourth at the exclusive Christopher Parkening Competition.

“I think it’s not a coincidence that a lot of the students here seem to be really hard working, responsible kids with a good focus and good work ethic about them,” said Miller. “I think that’s largely due to them working on something for a long time with a lot of consistency. They learn that if they work hard at something and put in the time they will get good at it. I think it’s nice just to have an avenue of learning that is one-on-one with someone who is really caring and hard-working and passionate themselves.”

The California Conservatory of Guitar is at 2905 Stender Way, Units 70 and 72. Visit www.thecaliforniaconservatory.com or call 408-844-8300 for more information.

RJJT's Sleeping Beauty: A Princess is Worth 100 Sleeps

Arts & Entertainment
Author Karl ScottPosted on April 6, 2011
One of my all time favorite films, and not just Christmas films, is probably one of yours too. Bob Clark’s 1983 film A Christmas...

Arts & Entertainment
Author Larry SacksPosted on February 16, 2011
Wilcox Stage Company is back, and this time they’re taking on a writer no less notable than William Shakespeare. This time, the production is...