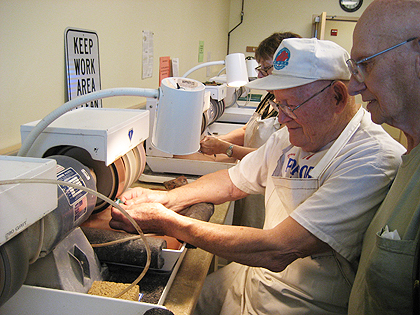 Lapidaries at the Santa Clara Senior Center leave no stone unturned as they cut, shape, smooth, and polish rough stones, transforming them into decorative jewelry, bolo ties, refrigerator magnets, and paperweights. A high work bench lines each side of the narrow lapidary shop, which accommodates up to 12 rock enthusiasts.

On a busy morning, all the work stations are taken as the lapidaries don bib aprons and sit on stools in front of the grinding and sanding wheels at each place. They lean forward, holding their stones against the whirring diamond wheels, intent on their tasks.

“We’ve gone crazy, whole hog into the hobby,” says Jim Ziegler as Jennifer Le, his wife, shapes a stone at a grinding wheel. Eventually, she will wrap it with silver or gold wire, perhaps making it into a pendant to give as a gift. Ziegler, who inherited his mom’s rocks when she passed away, and Le have been coming to the lapidary shop for two years.

“It’s just fun discovering something in the ground and the beauty of it,” says Ziegler, showing off a geode he found while rock hounding. “A geode [a rock mass that has a cavity usually lined with crystals] is always a surprise. It’s fun to cut because you never know what you’ll find inside.”

Jeff Grainger is more of a rock hound than a lapidary.”Wherever I am, I look for rocks,” he says. “I walk the Saratoga Creek by Central Park and find tons of good rocks.” Grainger uses the shop slab cutter to cross-section the rocks and is working on a display of Santa Clara rocks.

“It’s social,” says long-time volunteer Ed Mattie. “Some of us go out for lunch together and on outings. The camaraderie is nice.” One of Ed’s responsibilities is to make sure everyone remembers to chip in a dollar a visit to cover incidental items such as oil, polishes, and rags. The City covers all the other expenses. The friends find or buy rocks, sharing and trading among themselves.

“It’s pleasurable even though you don’t always have a use for what you do. You don’t decide what you want to do with the stones at the beginning,” says Mattie, who makes bolo ties and jewelry that he sells at the senior center fall craft show.

“Ed is my mentor. He showed me everything I know. He’s made his own templates for cutting rock forms—all different shapes and sizes. Ed’s quite a gem,” says Augie Robles, who has been coming to the shop for a year.

Ed, in turn, took a class from master craftsman Garth Duncan, who has been teaching lapidary skills since 1988. The adult education programs have been cut, but Duncan informally continues to share his skills at the senior center.

“We’re a bunch of helpful people. I like to help people,” Duncan says. “If they’re new, they don’t have any bad habits, and I can teach them the right way—my way!”

Jennifer Olsen-House, who sells the jewelry she makes, is another former student of Duncan’s. “The stones are so beautiful. I’ve been collecting them since I was six and I saw a big amethyst geode on a neighbor’s shelf,” she says, admiring some Morgan Hill Poppy Jasper stones she polished. Like Duncan, Olsen-House taught adult education classes. Their tip for rock hunters is to get the rocks wet to see their potential as they look drab when dry.

“She’d climb a mountain to get a rock,” says Mattie.

“There’s no cure. You get rock fever and that’s the end of it,” Duncan cautions.