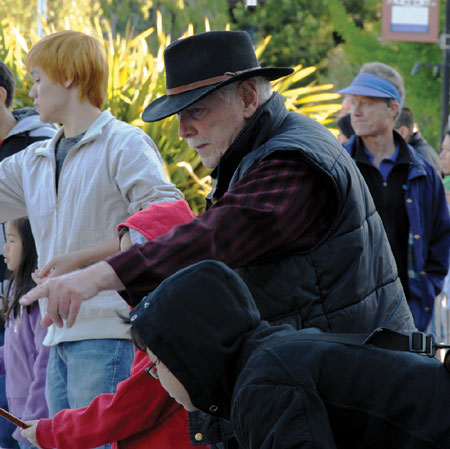 The fountain isn’t normally stocked with trout. But once a year, Santa Clara Kiwanis Club organizes its annual Fish Derby, stocking the pond and providing the fishing gear. With a cadre of volunteers from Key Club, PAL, the Boy Scouts, and local high schools, the energetic service club has been sponsoring the event for more than 30 years.

It’s no small feat to prepare the fountain for the Derby. The work begins Friday afternoon.

First, chemicals are added to remove the chlorine from the water. Then nine tons of ice — more costly than the fish — chills the water down to 55 degrees. Finally 1,250 trout, which come from a trout farm near Calistoga, go into the water. Kiwanis volunteers spend Friday night in a motor home nearby to babysit the fish. At the end of the day, uncaught fish are donated to a Salvation Army meal program.

“The greatest thrill for me,” says event veteran and Kiwanis member Scott Morton, “is seeing a special needs kid, who might not ever go fishing again, catch their first fish.” Today one of the many volunteers is Scott’s son Evan – who fished in the derby himself years ago.

Indeed, Evan would agree with six year-old Lucas, who says, “Going fishing was the most fun thing in the world.”

Despite decades of tradition, the annual Kiwanis fish derby has had its moments of uncertainty, as in the early-1990s when drought threatened to shut down the fun.

“The Santa Clara City Council voted 4-2 last week to fill the City Hall fountains with water and trout and let kids try to fish them out,” wrote the Mercury. “Some council members characterized it as a day of good, clean fun. But Councilwoman Sue Lasher reminded her colleagues that last year, the council told organizers they couldn’t hold the event again until the drought was over.”

“We had to promise to pump out the water on the grass after we were done,” recalls longtime Kiwanis member Rick Mauck.

Community Schools
Author Erika TownePosted on June 28, 2022
Santa Clara Unified School District (SCUSD) is looking for a new superintendent after Dr. Stella M. Kemp told the Board of Trustees she would...