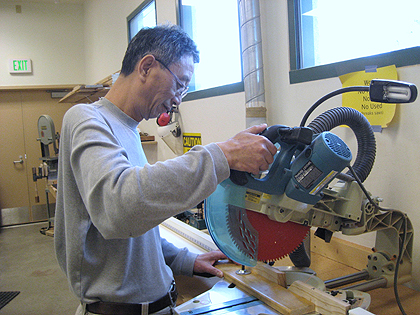 In the Santa Clara Senior Center wood shop on a Thursday morning, four retired men are clustered around a work table examining a small, round, pedestal table with a broken center post. Like a medical team conferring before operating on a broken leg, the men are evaluating the break, engaged by the challenge of making the table whole again. They toss around ideas, finally settling on one.

“You can ask others for help here, and it makes your project better,” says Allen Young, who has been coming to the wood shop for three months. He puts aside his own project and tackles the table.

“They have big tools that I can’t have at home, and it allows me to do more,” Young says. However, to repair the table, he uses Gorilla Glue and precision hand work.

“Women shouldn’t be afraid to come here. There are so many men willing to show you what to do without being domineering,” says Maryann Williamson, who knew nothing about woodworking when she first came last December. Then in just a month, she made two, seven-drawer closet organizers, saving herself about $600.

“Once you retire, you have a big sign on your back that says ‘Discarded.’ Now I’m not afraid to tackle anything,” Williamson says, already at work on her next home improvement project.

Mohindar L. Bhai didn’t want to sit around doing nothing when he retired as an accountant, so he took up painting at the Senior Center. Then he came to the wood shop to learn how to make frames for his paintings. “It gets me up,” he says. “I want to stay busy.”

“This is a great facility,” says Don Heaney, working on a redwood planter box with multiple bird feeders. “It’s not only the tool availability; it’s the knowledge and the cooperative attitude. There’s a lot of expertise here.”

Retiree Jimmy Chai works on small projects such as boxes as gifts for family and friends. “These are nice people,” he says. “They help me a lot.”

Ralph Foster, Jim Freitas, and Don Sutton are the key volunteers who keep the fully-equipped wood shop—as big as a three-car garage—running smoothly Tuesday and Thursday mornings from 8 a.m. to noon, donating their time, expertise, and even tools.

Foster donated a new “Sawstop” table saw that protects hands and fingers from the blade.

“It was something the shop needed, and something my wife and I wanted to do,” says the twice-retired Foster, who grew up in a family of woodworkers.

The woodworkers reach out to help the community. Don Sutton leads a team that makes small wood toys for Christmas stockings for Sunnyvale’s Santa’s Helper Program. They made 700 in 2010. Foster has repaired furniture and rebuilt bookcases for the library. Volunteers helped a Boy Scout with his Eagle Scout project—constructing a six-sided redwood bench around a tree in the senior center patio. Then they built a four-sided bench around another tree.

“We encourage people to get involved and give back in some way,” says Freitas, a retired pilot who built a second story on his house while still working full time.

“My whole life for 40 years was my work. It’s important to find something new for a sense of purpose. The best thing about volunteering is that we work together as a team. We add safety and help out,” he says.

In addition to helping out with wood projects, the wood shop volunteers help build new friendships.

Use of the wood shop is free after completion of an orientation class, offered twice a month for $10. For safety, shop use is limited to six people at a time. The next picture framing class is May 20.

Community
Author Carolyn SchukPosted on March 26, 2020March 27, 2020
The new South Bay Community Pantry (SBCP) puts new meaning into the saying, “hit the ground running.” Before it was even officially up and...

Community
Author Carolyn SchukPosted on July 22, 2015
A shared meal around a family table is about much more than food. It’s about comfort, companionship, and a respite from stress and worry....
SPONSORED