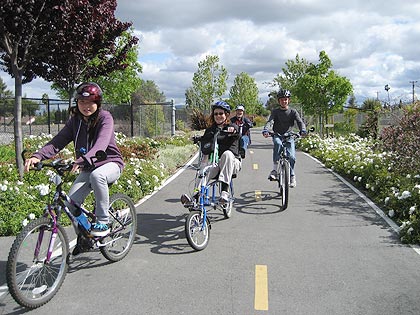 “I don’t bike to work as often as I would like to, so I’m biking to work May 12 to get myself in the habit again. It’s helpful to have a goal,” says Dale Schouten, a volunteer member of Santa Clara’s Bicycle Advisory Committee (BAC), established twenty years ago in May 1991.

“Bike riding is both exercise and fun,” says Schouten, whose wife and two children sometimes join him on recreational rides. His work commute is two and a half miles one way, an easy 15-minute bike ride. City maps with bike routes are available at the Community Center, 969 Kiely, and online at santaclaraca.gov.

The BAC, which meets five times a year, is working on a proposal for a Calabazas Creek bike trail. It has been instrumental in getting the City to install U-shaped bike racks around town, an ongoing project.

BAC meetings are open to the public, and the next meeting is 4 p.m., June 22, 2011, at City Hall. The committee is chaired by City Councilmember Will Kennedy. Information: www.santaclaraca.gov.