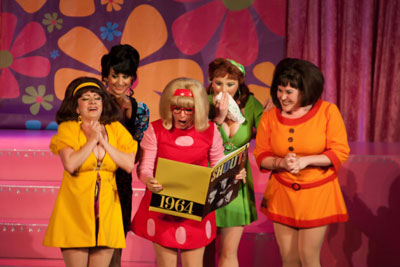 If you find yourself missing the swinging 60s, head over to The Retro Dome where for a limited time, Shout! The Mod Musical will take audiences back to a time when the micro mini was a wardrobe staple and go-go boots were part of everyday wear.

At first glance, Shout! comes off as a concert with minimal dialogue instead of musical theater. Watchers are quickly immersed into the Sixties with great tunes like Wishin’ and Hopin’ and Son of a Preacher Man. Each year is prefaced with a new issue of Shout! Magazine, and, with every song and letter to advice columnist Gwendolyn Holmes, you begin to learn more about the five women living in London during a revolutionary time period.

The girls, most likely in their 20s at the start of the musical, are very different. Red Girl is essentially a big mess of contradictions, while Orange, and later Purple Girl walks the line between domestic goddess and a woman completely independent of her husband. Yellow Girl is thought to be American for her loud and thoughtless approach and Green Girl is a redheaded tart (shocking!) with a flair for breaking up with boys. Finally, Blue Girl is a self-centered, supermodel-type with a shocking secret. Are you having a ROY G. BIV moment yet?

The unique format of this musical works and by the end of the first act you start understanding the plight each girl is dealing with. The second act is full of equally great music like Georgy Girl, These Boots Were Made for Walking and Shout. With each song the storylines wrap up as each color finds the pot of gold at the end of her very own rainbow (and finally it all makes sense!).

Within the play there are plenty of references to the time period like Yellow Girl’s obsession with Paul McCartney, Orange Girl’s fight with being a wife and mother versus living out her own dreams, and Green Girl’s involvement in the sexual revolution. Those who remember the time period well will find themselves laughing at the jokes and reliving an era when it wasn’t safe to trust anyone over the age of 30. Those who didn’t grow up during the Sixties will completely dig the groovy minidresses and wonder where they can get themselves a pair of white vinyl boots!

Since there aren’t many lines, the singing voices of the performers must carry the show…and they do! Hilary Little, who was recently praised for her role as Melponene in The Retro Dome’s production of Xanadu continued her brilliance as Orange Girl, but was surprisingly upstaged by Green Girl and the powerful and sexy voice of her younger sister, Ashley Rae Little. Yellow Girl and Retro Dome newcomer, Catherine Brady, a recent graduate of Chapman University, has a sweet pitch to her very melodic voice. Kate McCormick dazzles as Blue Girl and Red Girl, Shannon Guggenheim, most recently remembered as Calliope in Xanadu, was fantastic as always. The choreography Guggenheim came up with for the production will make you want to stand up and break out moves like the Monkey and Frug that have been shelved for far too long.

There really is something for everyone ,as Shout! reminds us of a time when the world was a little chaotic, but the problems were still very similar to what many young people go through today. If nothing else, don your best groovy attire, sing-along to the superb songs and swing your hips along with the sounds of Shout!

Shout! The Mod Musical is playing for a 4-week exclusive engagement at The Retro Dome. From now until September 18, shows will be Friday and Saturday at 8 p.m. and Saturday and Sunday at 2 p.m. The show is rated PG-13, but if you have youngsters, check out the PG matinee performances. Tickets are $38.50 for adults and $32.50 for seniors, students and military and can be purchased at www.theretrodome.com or by calling 408-404-7711. The Retro Dome is at 1964 Saratoga Avenue in San Jose.