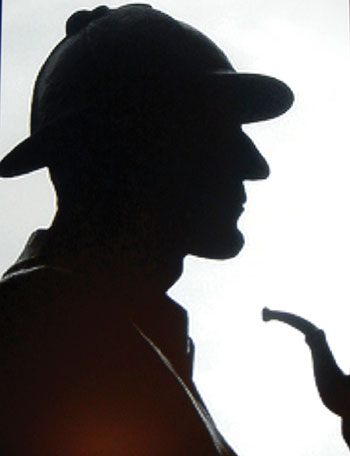 “Over the past five weeks we’ve looked at the blend between literature and art – how the same events, ideas, the same cultural inflections that may have inspired a book [or] a work of literature, such as To Kill a Mockingbird and Parzival,” said the Triton Museum of Art’s Chief Curator Preston Metcalf in his lecture on Sir Arthur Conan Doyle’s Sherlock Holmes on Nov. 14. “The same ideas also affected the artwork and gave us the type of art that we had. This week is a little different. This week we’re going to be looking at Sherlock Holmes. Not because his works speak of a time, although they certainly do, but we know that Sherlock Holmes has been transposed to many different times and he is still equally as enjoyable.

“No, tonight I want to wrap up this session – this series of lectures – looking at how Sherlock Holmes exercises his deduction, because to be quite truthful, that’s how I learned to look at art.”

After giving a short background on Sherlock Holmes, beginning with the character’s introduction in 1887, Metcalf explained that Edgar Allan Poe and Dr. Joseph Bell influenced the creation of the fictional character. He also discussed the legend in modern times – the movies starring Robert Downey, Jr., the BBC show, Sherlock, and CBS show Elementary. The real meaning behind this lecture, however, was explaining how anyone can use abductive reasoning to understand any piece art.

“[Holmes] noticed what was different, but he doesn’t stop there,” said Metcalf. “He didn’t guess, but he made inferences. He made guesses and assumptions, even though he would not call them that. That’s how I want you to look at art. I want you to look at it as if you were Sherlock Holmes, looking at a mystery.”

Metcalf then discussed how some of tiny, odd details in Jan van Eyck’s “Giovanni Arnolfini and His Bride,” William Hogarth’s “Breakfast Scene,” Titian’s “Venus of Urbino,” Edouard Manet’s “Olympia,” and Giorgione da Castelfranco’s “The Tempest,” allow the viewer to see the true meaning behind these and other pieces of art.

“Now, because I looked at what is odd…It helped me to read a painting,” said Metcalf. “So that’s what this is about. Now, we’ve talked about this – it looks familiar. That’s where most of my clues come from: What looks odd and then what looks familiar [and asking] why does it resonate with me? Now if you look at that painting and say, ‘that reminds me of something else over here,’ even if it’s a different discipline…if you make that connection, trust it. Absolutely trust it. You are more likely to be correct than you are to be wrong…So look at the familiar. Trust it, and you will be able to read the painting when nobody else does.”

Visit www.tritonmuseum.org for more information on the museum and its programming.

Arts & Entertainment
Author Melissa McKenziePosted on March 12, 2014
Starting Arts African drummers, show-stopping artwork and a packed house were part of the opening reception for the latest exhibit, The Journey, at Santana...