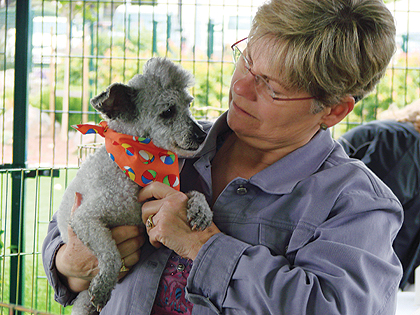 The event, organized by HSSV, was created to target individuals and families who love small dogs. “We also want to try and educate the public about small dogs and what a wonderful addition they can be to a home,” said Kelly Grant, HSSV’s marketing manager.

“Small dogs have a longer life span,” added Jeri Seiden, HSSV’s special needs manager. “They can do everything a big dog can do. You see them doing agility and helping out as police dogs. They can go everywhere with you and are extremely loyal and affectionate.”

Seiden went on to say that part of the abundance of small breed dogs right now is because they were, at one time, very popular and trendy. Now, HSSV and other shelters across the nation are experiencing the fallout from the decline in popularity of smaller dogs. Also, with the housing and economic problems plaguing our nation, many owners have been forced to find new homes for their pets due to forecloses or lost jobs. In addition, HSSV has been noticing a trend in most of the small breed dogs being unaltered which has played a role in the current influx of these types of dogs in shelters. This is partially why HSSV is currently promoting a low-cost spay/neuter offer for residents of Santa Clara County and has declared May Chihuahua-Palooza month.

Throughout the day, hundreds of people walked through HSSV’s doors and visited the dog park where each of the visiting rescue groups were set up with some of their adoptable dogs. At 2 p.m., members of HSSV’s Compassion in Action, a group of teens involved in an eight-week course to learn more about animals, set up activities to help educate people about small dogs. They talked about a dog’s body language, and had attendees play a game focused on animal stereotypes. They also set up an arts and crafts table where visitors could create treats for both humans and dogs.

At the end of the day, 13 small breed dogs and a total of 20 animals left with new families. HSSV adopted eight dogs, including four Chihuahuas and three cats during the event and the rescue groups in attendance were able to find homes for nine of their dogs.

Community
Author Diane AndrewsPosted on September 24, 2014
It was standing-room only for free popcorn, cider and a movie at the annual Harris-Lass Museum movie night Sept. 12. Each of the three...

Community
Author Diane AndrewsPosted on March 2, 2011
“Why camellias?” I asked at the 70th Camellia Show and Plant Sale sponsored by the Camellia Society of Santa Clara County, February 26 and...