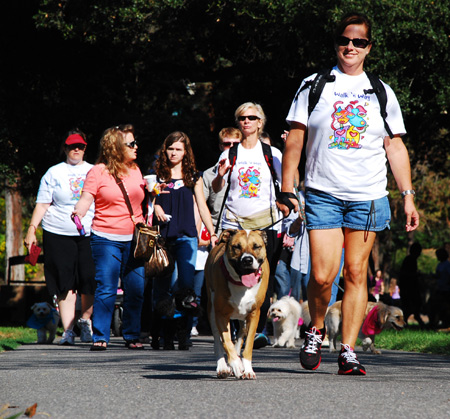 “In 2009 and 2010, Walk ‘n Wag was held at our Milpitas Animal Community Center to bring awareness to our new location,” said HSSV’s Marketing Manager, Kelly Grant of the October 15 event. “We love to hold this event at a park, as it’s a wonderful location for all our two-legged and four-legged community members to come together.” In 2008, the event was held at History San Jose and Kelly Park and HSSV wanted to return to this location in 2011.

Each year, individuals and corporations “compete” for the title of “Top Dog.” This year the award went to Santa Clara-based tech giant and Walk ‘n Wag sponsor NVIDIA. NVIDIA raised over $30,000 for HSSV. “Much of this was a result of the generous matching programs offered by NVIDIA,” said Grant. “CEO Jen-Hsun ‘Jensen’ Huang matched the team’s total fundraising amount and NVIDIA’s Foundation matched employees’ donations dollar-for-dollar…In total, we estimate they raised over $70,000.”

Other top-raising Silicon Valley-based corporations include: Aruba Networks, Google, PriceWaterhouseCoopers, and Cisco Systems. HSSV set a goal of raising $165,000, but smashed that by raising over $186,000. “This is truly a record-breaking year for us,” said Grant.

“100% Pure is proud and honored to support the HSSV. Walk ‘n Wag was a huge success,” said Susie Wang, founder of the San Jose-based cosmetics company. Wang also stated that all of the proceeds from the sale of 100% Pure’s Cocoa Berry Lip Gloss will be donated to HSSV so the company can “support all of [HSSV’s] great work with animals!”

As the second largest fundraiser HSSV puts on each year, the Walk ‘n Wag is a way to bring people and pets together, foster relationships between HSSV and the community, and raise vital funds that keep HSSV doing what the organization does best – helping homeless animals.