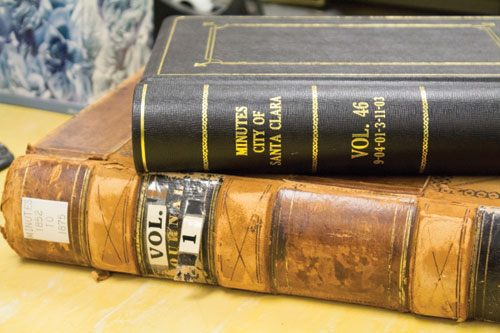 When documents get put into record books there’s a small team of people in the City of Santa Clara in charge of making sure they’re available for generations to come. The team, which includes City Clerk Rod Diridon, Jr., Assistant City Clerk Jennifer Yamaguma, Office Records Specialist Jose Armas, Office Specialist to the City Clerk Lynn Garcia and Microfilm Processors Aaron Migliacco and Craig Fisher, works to ensure that each item that passes through their office gets handled with care and goes through the proper process of preservation.

“The City Clerk’s office is responsible for protecting the official, historical record of the city,” said Diridon. “We do so primarily through the City Council agenda and the documents included in that process…While it’s become more formal over time, City Clerks have been protecting the record for more than 160 years in one form or another.”

One example is the creation of a resolution – the documents through which much of the City’s business is enabled. In order for a resolution to be recorded, it has to go through a series of steps. The first is that someone – City Council, staff member, or the public – will propose a policy and vet the topic through the City Attorney’s Office, City Manager’s Office, or the appropriate City department. The City Clerk’s office then reviews the document and incorporates it into a City Council meeting agenda for public consideration. If the council approves the resolution, the Clerk’s Office formalizes the documents by including who voted for and against it, affirming it with a signature and affixing the City Seal.

In the days following a Council Meeting, a summary of the minutes is provided so the public has an outline of what happened. Draft minutes are then composed to capture things like who spoke, whether or not a discussion occurred, if photos were taken, and what action or direction was given. These draft minutes are then cross-checked by the team in the Clerk’s Office as well as by City staff, and as a part of the agenda by the City Council and the public. “We take the composition of minutes very seriously,” said Yamaguma. “Each set of minutes is scrutinized multiple times to make sure they accurately reflect the business that occurred at the Council Meeting.” Once approved, they are put into a formal minutes book and become the official record of the City. 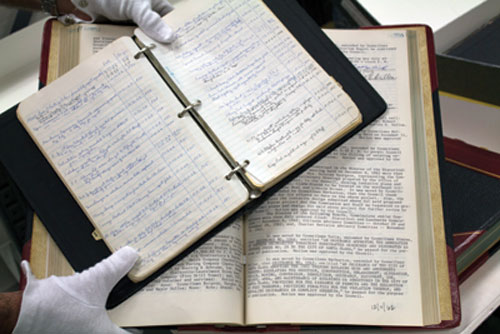 Volumes of minutes books, dating back to 1850 sit in the basement of City Hall. As part of the protection process, meeting minutes are printed on acid-free paper, put into an acid-free hardcover book, placed into an acid-free box, and set in a fireproof vault to ensure sustainability.

When a member of the public asks to see the records of a council meeting or items pertaining to a project, Armas searches the database, pulls the records, and distributes them. “As important as saving the record is knowing where to find it,” said Armas, who relies on both electronic databases and type-written indexes to track records from various time periods.

In addition to policy-related documents, the clerk’s office is also responsible for maintaining good-government reports, such as statements of economic interest (700 forms) and campaign contribution records. While preserved differently from council meeting minutes, it is still the Clerk’s job to make sure that the records are not only accurately kept, but are available for members of the public to view either online or on request.