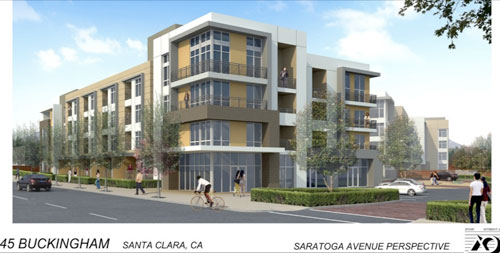 Development proposals are coming before the public and City Council at special study sessions prior to regular Council meetings. This is part of Planning Department efforts to bring projects before the Council in earlier stages of project design, Planning Director Kevin Riley explained at last week’s study session on a proposed residential development at Saratoga Avenue and Buckingham Drive.

The proposed development covers two parcels – 45 Buckingham Drive and 66 Saratoga Ave. The area is currently home to small retail – including the Hot Stuff and Smoke Stuff shops – small auto repair businesses, and two large parking lots. The developer, Prometheus, is asking for a zoning change from Commercial Thoroughfare (CT) to Planned Development (PD) residential, to build a 222-unit four-story apartment complex with wrap parking (372 parking spaces), and 116 secure bike parking spots. “It will be a real change for the area in a positive way,” said Riley.

The development would be a plus for the city’s bottom line. The current assessed value is $818,000. This development would increase the site’s valuation almost 10 times, to $68 million – an additional $70,000 to Santa Clara’s general fund, Santa Clara Economic Development Officer Ruth Shikada told the Council Tuesday night. In addition, it would create 500 construction-related jobs.

To make the neighborhood more “street friendly,” parking will be concealed, the Saratoaga-facing buildings will have stoops, and all aspects of the buildings are designed to be visually appealing – rather than a distinct “front” and “back” – the project’s chief architect told the Council.

The addition of 222 new households (500-600 new residents) to the city would have a continuing positive effect on municipal finances, as well, Shikada explained. Residents spend about 25 percent of income on taxable merchandise, with at least half of that spent within the city limits.

The project is slated for review by the Planning Commission at the end of October and full Council review and action in November.

San Mateo-based Prometheus Real Estate Group (www.prometheusreg.com) is a privately held real estate development and management company that has a significant footprint in Santa Clara. Prometheus manages 3,500 apartments in Santa Clara, including the Orchard Glen apartments on Saratoga Avenue, and took over the 900 Kiely development after the bankruptcy of the developer that started the project. In October, Prometheus received 2013 Silicon Valley Leadership Group’s Most EV Ready Development for its Madera Apartments.

Affordable Housing Funds Down for 2014-15

Now, estimates are that the city will only have about $30 million available for these programs. Santa Clara will receive about $11 million from federal Community Development Block Grant (CDBG) and Home Investment Partnerships Act (HOME) grants. However, these federal grants are substantially lower than they were in 2010, according to the Council agenda report.

In other action, the Council:

Did you know that you can comment on City Council Agenda items and share them with others directly from the city website? Simply go to the agenda webpage and select the “Make a comment” or “share” button on the right hand side. That will open a form where you can type your comments.

Also, the city website now shows current development projects – proposed, approved, pending, and completed – with links to pertinent details as well as maps, renderings of the finished projects, and photos of work in progress. Visit santaclaraca.gov/index.aspx?page=2571.

At its Oct. 8 meeting, the County Board of Supervisors appropriated an additional $247,000 for Senior Nutrition Program (which funds Meals and Wheels), $3 million more for CalWORKS Expanded Subsidized Employment Program, and $1.4 million more for accounting services from Accretive Health for Valley Medical center.

The extra manpower is needed partly because, at the same time it’s transitioning to a new accounting system, Valley Med has $272 million in outstanding insurance claims that are at risk of becoming too old to collect. The accounts are in the old system, Accretive staff have experience with the old system, and the county doesn’t want to invest money in training new employees in systems that are being phased out.

The Supervisors’ regular meetings are Tuesdays at 9 a.m. in the Board of Supervisors Chambers, 70 West Hedding St., San Jose. You can find links to meetinng agendas, videos, summary minutes and transcripts at http://sccgov.iqm2.com/Citizens/Default.aspx.

Through the Legal Looking Glass of Northside Library Controversy