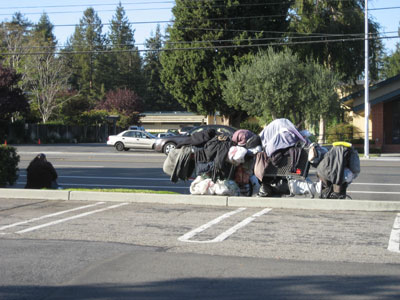 On any given night in Santa Clara County, 7,045 people are homeless according to a 2011 Santa Clara County Homeless Census and Survey. Of this number, 2,520 are considered chronically homeless, an increase of eleven percent since the 2009 census.

“California has the highest homeless population in the nation. On any given night, 360,000 men, women, families, veterans, and children are sleeping on our streets, in tents, or in temporary shelters. Due to the economic crisis, the state has seen an increase in families with children living on our streets or in homeless shelters,” says Fong.

“Here in Silicon Valley with the focus on things we do well, we forget that in the shadows of billion-dollar companies, are homeless people living in the streets and along the creeks,” says Kalra. “We are looking at what we can do to lift people up out of poverty and into homes.”

“It’s not a partisan issue,” says Wasserman. “It’s the right thing to do, and it’s the fiscally responsible thing to do.”

A panel on “Systems for Solutions” was comprised of representatives from Community Technology Alliance and Housing 1000, HomeBase, Destination: Home, the City of San Jose, and Santa Clara County.

“The single most important barrier to achieving the goal of reducing chronic homelessness is the lack of permanent affordable housing,” says Ky Le, Director of Homeless Systems for the county. “We need a dedicated funding source for affordable housing.”

A second panel addressed “Implementing Solutions for Housing and Life Services for the Homeless.” Alex Sanchez, with the Housing Authority of the County of Santa Clara, spoke of making sure housing voucher holders retain their assistance even in the face federal budget cuts.

Christine Burroughs, CEO of InnVision the Way Home, discussed the importance of implementing the Housing First model, which focuses on getting people into permanent housing as quickly as possible and then addressing their social service needs.

Lisa Blakely and Geoff MacDonald, with Community Housing Partnership in San Francisco, spoke of the need for housing that is permanent (no time limits on when you have to leave) and that comes with on-site social services that are voluntary rather than mandatory.

EHC LifeBuilders CEO Jenny Niklaus pointed out that providing housing is a health intervention because living outside deteriorates health. “It’s three times less expensive to have someone in housing rather than living on the street. First you get them housing, then you deal with the personal issues,” says Niklaus.

“The barriers to ending chronic homelessness are money and the political will to do it,” says Kathy Robinson, Director of Housing Development for Charities Housing.

Housing 1000 (www.housing1000sv.org), the local chapter of the national 100,000 Homes Campaign, is in partnership with local agencies to reach its goal of identifying 1,000 of the most vulnerable homeless in Santa Clara County (comprised of 13 cities) and permanently housing them by July 2013.