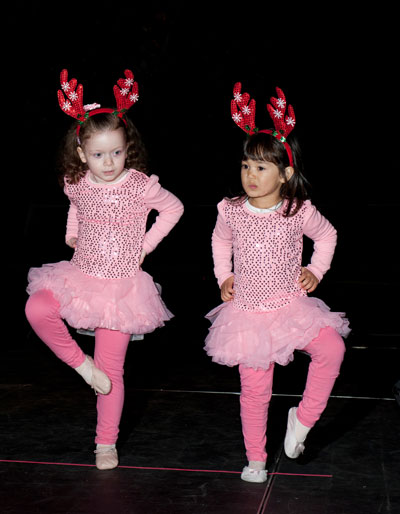 The air was cold on the evening of December 7th, but hearts were warm with holiday happiness at the City of Santa Clara Tree Lighting Ceremony. People milled about with plenty to see and do.

The main attraction was the huge Christmas tree in Civic Center Plaza, the site of the festivities. Teddy the Bear has been graced the high treetop since 1911, when the City’s holiday tradition began. Teddy climbs to the treetop with the help of the City Fire Department, according to Jessica Carter, one of the Parks and Recreation organizers of the event.

An outstanding community member is chosen to have the honor of lighting the tree. This year recently retired City Manager Jennifer Sparacino, who has the longest tenure of any City Manager in Santa Clara, briefly returned to duty to throw the switch on the spectacular lights that could be seen for miles. The electricity was offset by 100 percent green-e certified renewable energy from the Santa Clara Green Power program. (For more information, visit siliconvalleypower.com/green)

The holidays were ushered in when Santa arrived on a fire engine, as spectators sang, “Here Comes Santa Claus.” Children eagerly lined up to see Santa and his elves. ” I believe the elves are Santa Clara Police Cadets and Community Service Officers, ” said Carter.

“She likes the music, and she tried to touch Sparky,” said Crystal Wittcke, of her infant daughter. Sparky is the large firedog character, who along with Ted E. Bear, is there for the younger crowd.

Music is another part of the popular event. The Buchser Middle School Jazz Band and the Déjà vu Jazz Band – both led by talented teacher David Ladd Anderson – had everyone moving to the beat. The Wilcox High School Choir, at this event for the first time, sang carols led by David Hibbert. They “sounded like angels,” said Director of Parks and Recreation, James F. Teixeira, in the opening of his speech.

The program was rounded out with the lively Parks and Recreation Department Dancers, led by Miss Linnea. Master of Ceremonies Miss Santa Clara 2012 Caitlin Hoemmelmeyer was also there in one of her last public appearances in that role.

And, if someone decided the night was too brisk to stand at the stage without something warming before returning to the entertainment, there were refreshments to do just that.

“We weren’t sure what the weather would be like this year, so this year for the first time, we are serving chili,” said Kathy Kuwano, Vice President of the Santa Clara Sister Cities Association Youth Commission.

People strolled through the booths for information from the Parks and Recreation Department, to see the Police and Fire Department safety displays, and to learn about energy conservation from the Silicon Valley Power representatives. The City of Santa Clara Youth Commission was busily doing free face painting.

“It is really fun to see the little kids so happy and cute, after they get their faces painted,” explained Sufyan Abbasi, when asked why he is part of the activity.

And so, the annual Christmas Tree Lighting is again a heartwarming, happy success!

Community
Author Carolyn SchukPosted on March 26, 2014
Santa Clara Rotary is going to have to be pretty creative to come with programs for next year’s meetings that are up to the...

Community
Author AdminPosted on June 25, 2014
It was a heart transplant that saved Kaiser Permanente patient Stanley Crayton’s life in 2001, and just recently, Crayton may have helped save his...
SPONSORED