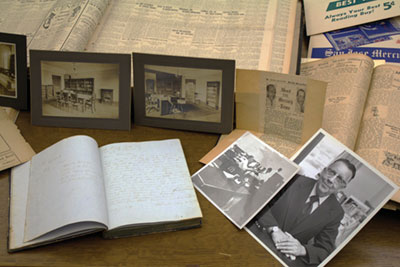 It was back in May when Danny O’Neal and his wife, Mollie, were cleaning out her aunt’s home on Benton Street. Buried deep within the garage was a beaten up black book. Upon closer inspection, it became clear that this wasn’t just any book, but a document of Santa Clara history – one that predated the city’s 1852 incorporation.

“This will be the first official record of the city,” said City Clerk Rod Diridon, Jr. “This was at a time before the city had started. [Back then] you had a justice of the peace who would serve in a lot of different roles – primarily in settling disputes between neighbors and business partners. Normally this would have been handled – even a few years later – by a city government or by the fact that there were ordinances and a rules and processes of law.”

From a marriage contract between Louis Wampach, founder of the Santa Clara Tannery, and Charlotte Glein, whose family eventually purchased the company, on April 1, 1851 to a monetary dispute between H. H. Warburton and John P. Chrisman, every legal matter that took place in the township of Santa Clara is documented. 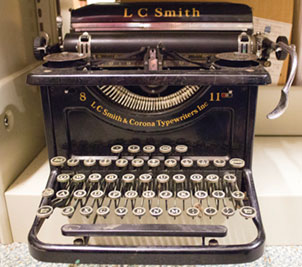 “This was an amazing find,” said Mayor Jamie Matthews. “It’s like opening a time capsule and finding the birth certificate for our city! The significance of this document is yet to be fully realized. It gives us a window into the past that we do not have from any other documents. I am thrilled it has been saved and donated to the city so that we can have a greater understanding of our past and to make it available for future generations.”

In addition to the docket, the O’Neals donated original photographs from Alice Hare – one of the founding members of the Santa Clara Woman’s Club and chairman of the Historical Landmarks Committee. Hare’s photographs proved to be extraordinarily special to the city’s history.

“[The O’Neal’s brought in] these pictures – these beautiful, historical pictures,” said City Librarian Mary Hanel. “One of the inside of the Santa Clara Library – the original Santa Clara Library – and another of the collapse of the water tower and information about the water tower from the 1906 earthquake…What’s interesting is that I had her postcards, and now I have her original pictures.”

The modest library contained a large table with chairs, couple of bookcases, and fireplace. Another photo shows additional bookcases, a desk and three chairs. Prior to the find, the city only had photos of the outside of the building.

“It was just really exciting to see pictures of the inside of the first library so we can kind of figure out the rest of our story,” said Hanel. 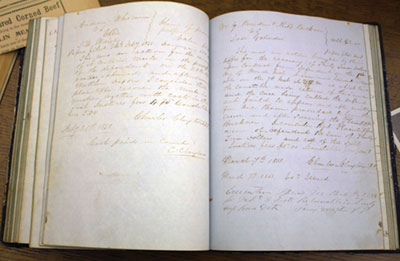 “I can almost smell what this room looks like,” added Diridon. “I’m going to smell a little bit of the mustiness and a little bit of the wood from the walls. It’s going to creek a little bit on my feet when I walk in there. I think about how neat that must have been for somebody to walk in there – at a time when books weren’t all that prevalent – and say ‘Santa Clara’s got a library. These are my books. I get to look at these books whenever I want.’ What an empowering thing that must have been for residents and how special this room was – this first room of our library – how special that was for kids and people doing research and people just for the joy of reading…How cool is that that we have pictures of that now?”

Hanel has been filtering through and finding homes for the items received. The docket has been put inside an acid-free box and placed in the city’s vault. The photos will remain at the library, along with a giant book-bound edition of six months of San Jose Mercury News articles from 1902. A semester of papers from Fullerton College will most likely be sent to Southern California and a semester of San Jose State University newspapers will hopefully be sent to the San Jose Library. Hanel would like to see other items, like souvenirs from press club dinners and Mercury News reporter Ben Hitt’s typewriter, added to History San Jose’s collection.

Arts & Entertainment Community
Author Diane AndrewsPosted on May 25, 2016
What would it be like to be “Alice (or Alex!) in Waterland?” Girls and boys, ages five to eleven, can experience what it’s like...

Community
Author Diane AndrewsPosted on October 11, 2017
Come November, Off the Wall Soccer begins its 25th year in Santa Clara, where, in 1993, an old tomato packing building owned by Gangi...

Community
Author Melissa McKenziePosted on April 17, 2013
There are plenty of bridal salons in the Bay Area. From chain shops to independent boutiques, brides-to-be have hundreds of options for when it...
SPONSORED