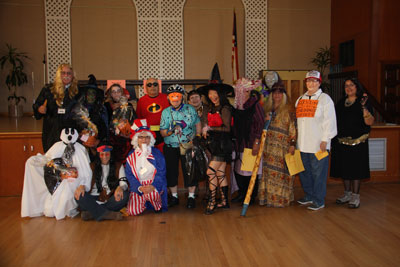 “I’ve never grown up. I still like to dress up and play. I’ll never get old,” says Jolene Millette, peaking out through the black eyeholes of her white ghost costume. Millette placed second in the costume contest at the 4th annual Halloween party Monday noon at the Santa Clara Senior Center, 1303 Fremont Street. Barbara Shaw, dressed in serious bicycle gear, came in fourth place then biked home.

First place winner was the scariest, wickedest-looking witch this side of the Land of Oz, a green-faced Julieta Wood. Wood loves witches so much that she makes witch dolls out of lobster claws. Could this be the ultimate in recycling for Red Lobster restaurants?

“Halloween is my favorite holiday, and my whole house is decorated inside and outside. About 100 kids came through last year,” says Wood. “I gave out toys, not candy.”

Laureen Dickerson as Princess Dracula, gowned in red and black, came in third place. You could almost see blood dripping from her fangs, and a gigantic black widow spider adorned her right ring finger.

“I love to scare the kids,” says Dickerson. “Halloween is the only holiday I celebrate. My brother died at 16, and Halloween was his birthday.”

After the costume contest, about 30 seniors viewed “Dr. Jekyll and Mr. Hyde” and had pumpkin pie with whipped cream. All the prizes and treats for the party were donated.

“Seniors come to participate in the nutritious lunch program and socialize,” says Carolyn McAllister, dressed in red, white, and blue as Uncle Sam, complete with a white mustache and beard. The part-time senior center worker initiated the annual Halloween party and costume contest and organizes it every year.

“It’s something fun, and I like having fun,” Uncle Sam says. Who knew he was such a party gal?

Community
Author Erika TownePosted on November 3, 2020
COVID-19 has put an end to a lot of annual festivities in 2020, but the City of Santa Clara didn’t want it to stop...

Community
Author Melissa McKenziePosted on June 20, 2012
Elizabeth Young had no intention of working in animal rescue and she definitely never thought she’d specialize in pigeons and doves, but a change...

Community
Author Erika TownePosted on December 6, 2021December 7, 2021
After a year’s hiatus, Santa Clara’s annual tree lighting ceremony was back out in force in Central Park on Dec. 4. Hundreds of people...
SPONSORED