Cooke was charged last week in the criminal conspiracy, in which six other eBay security executives, including retired SCPD captain Brian Gilbert, were charged in June. Last week, U.S. Attorney Andrew E. Lelling named Cooke as “Supervisor 1” who appears in the complaint and other documents in the case. [FBI-Affidavit-against-eBay-employees-for-harassment-1]

Although Cooke didn’t do any of the dirty work himself, he’s alleged to have been involved in every aspect of the conspiracy from the harassing tweets and messages directed at the victims, to generating ideas for a series of creatively revolting deliveries — including live cockroaches and pornography — to physically stalking the victims, to the attempted cover up in which the pair discussed using Santa Clara police officers.

Case documents allege that Cooke and Gilbert were central to strategizing the cover-up.

The cover up began in mid-August when the schemers got wind of the police investigation. In the course of strategizing about ways to mislead the investigation by creating phony “persons of interest” and pretending to assist the police, Cooke sent the memorable “Good plan, Brian” text.

“Copy all. Good plan and cover. Brian, important to be convincing so they don’t start looking to find video of who purchased the gift cards,” Cooke wrote. The cards used to send the harassing deliveries were purchased at a Santa Clara Safeway by alleged co-conspirator Veronica Zea, as Santa Clara resident.

“Don’t think they would go that far but is a little concerning,” Cooke continued. “If I was the [Massachusetts] Detective I would ask you for a local PD contact to go get video. Might want to have a friendly in mind.”

Gilbert replied that he “was thinking the same thing. If they bring it up I might volunteer to assist with that. Then we can control the local cop and maybe provide a video from a different Santa Clara Safeway.”

The City announced in June that it would be launching an investigation into possible wrongdoing by Gilbert, and presumably Cooke, during their tenure in Santa Clara. Because the crimes they are alleged to have committed were not in the course of their employment with SCPD, they will not lose their pensions. Cooke and Gilbert received pensions of $222,401 and $207,562 respectively.

Santa Clara Police Chief Patrick Nikolai said in an email that he was “extremely disappointed” by the news about Cooke.

“I had a conversation with him before the new charges came out,” wrote Nikolai. “He told me that he had been laid off from eBay and that there were potentially charges going to be issued.  He said that he could not really discuss anything because it was all confidential.”

Cooke and Gilbert aren’t the only retired SCPD officers to work in eBay’s corporate security operation. Former SCPD supervisor Scott Fitzgerald also took a security job with eBay when he retired, and according to his LinkedIn page, is still employed there.

* The preamble to the harassment campaign was a text exchange between two unnamed executives about “taking down” the author of the critical articles. 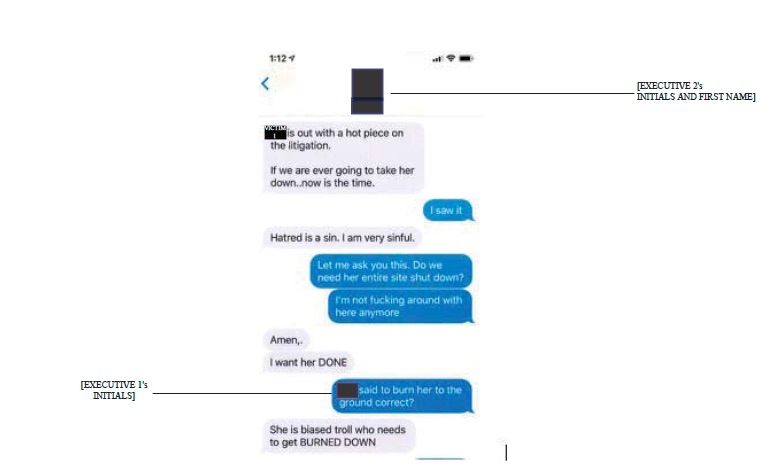 Bloomberg News makes the case that Wenig is likely the indictment’s Executive 1 based a specific sentence in the Newsletter story that the indictment quotes. The news network also alleges that Executive 2 is former eBay Chief Communications Officer Steven Wyman, based on its insider sources.

Neither are charged in the case. Both left eBay last fall and the company has said publically that the reasons for their departures are unrelated to the harassment conspiracy.

Public Safety
Author Erika TownePosted on October 25, 2022
A routine patrol early this morning by a Santa Clara police officer kept thieves from running off with a “significant” amount of firearms. Santa...