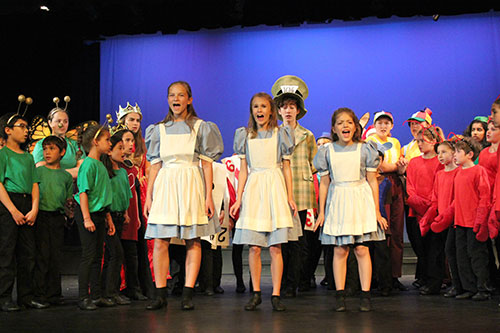 During the June 6 dress rehearsal of Roberta Jones Junior Theatre’s “Disney’s Alice in Wonderland Jr.” at the Community Recreation Center, Lewis Carroll’s popular children’s book classic came alive on stage (the show ran June 9-11). The story began with Alice dreaming about wandering down a rabbit hole. Arriving in Wonderland, Alice encountered zany and twisted characters and became Tall Alice and Small Alice from what she ate and drank . By the end of the musical, Alice was at the mercy of the vicious Queen of Hearts who demanded Alice’s beheading.

“In this version, Alice discovers who she is because she encounters a variety of characters who are not like her; it’s a journey of self-discovery,” said Kevin Cornelius, recreation supervisor for the Santa Clara City Parks and Recreation Department.

Jane Jones (no relation to Roberta Jones), 12, who played Alice, elaborated on how adversity steered Alice to rise to the occasion.

“The Queen is very rude and mean to Alice and, in the end, Alice stands up for herself and is more aware that she can do many things she couldn’t do before,” said Jane Jones. “[At Alice’s trial], all the witnesses get called up, including Tweedle Dee and Tweedle Dum, the Golden Afternoon Flowers, the Mad Hatter and the March Hare. They all try to say bad things about Alice but she doesn’t believe that. In the end, the butterfly and caterpillar come and ask Alice who she is. Alice explains that she is not what all these characters say she is. She says she is something special.”

In one scene, Small Alice, played by Karoline Vader, 9, encountered unwelcoming vibes from snooty mean flowers, also known as the Girls of the Golden Afternoon.

“I would stand up for myself and if [those people don’t stop], I would tell someone like an adult,” said Vader, explaining how she would respond to rudeness. “Alice was really mad at the flowers because she didn’t like how they were treating her. At first, she wanted to be like them because she thought they were pretty. Alice probably didn’t want to be like them after they treated her that way.”

Sean Wainzinger, 14, shared that the Mad Hatter he played was a crazy man of delight who tried to confuse Alice into doing things out of her comfort zone. For example, at his tea party, the usual rules for musical chairs didn’t exist.

“[When the Mad Hatter pushes Alice to the floor], he’s telling her to chill out and have a little bit of fun,” Wainzinger said. “The Mad Hatter is a bit of a psychopath. He’s never someone’s friend. He just wants to cause a lot of trouble sometimes. He has good intentions, but he’s reckless.”

“Wonderland was a confusing place to be and the White Rabbit wanted to get to the Queen on time so he didn’t lose his head,” Phares said. “I think this is a very important role in the story that brings the whole show together.”