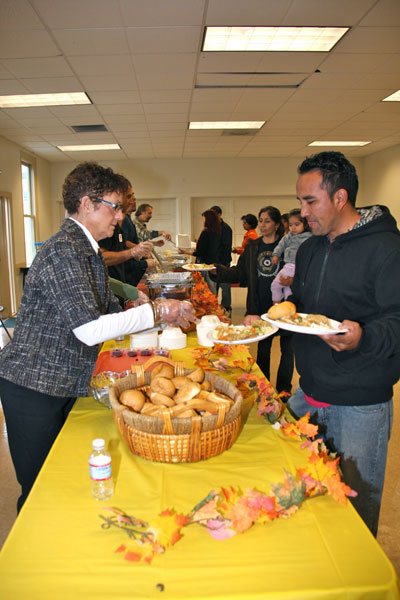 For the 5th year, the Marsalli family invited anyone in need or alone to share a free dinner with them at St. Clare’s Parish Hall on Thanksgiving. When the doors opened at 12 noon, the line was out the door and down the sidewalk. Close to 200 meals were served in the first 30 minutes. This included 20 meals given to the USO for any military personnel passing through and meals for homebound individuals. Twenty-four donated turkeys were cooked, carved and served with unending portions of stuffing, mashed potatoes, gravy, vegetables, salad, desserts and beverages. Although the kitchen ran out of vegetables, mashed potatoes and even turkey, volunteers rushed to restock the food so no one would be turned away.

Mr. D., a homeless man, said it was his third year attending the dinner. It meant so much to him to have a meal on Thanksgiving Day that he wished he could do something for the Marsalli family. He was told that just by walking into this event he had given a gift to the family because they do this out of the joy of giving. He teared up and rushed away, overcome.

Larry Marsalli, born and raised in Santa Clara, said “I was brought up to give to the community. This dinner is what giving is all about.”

Over 600 people enjoyed the Thanksgiving meal this year thanks to the Marsalli family.