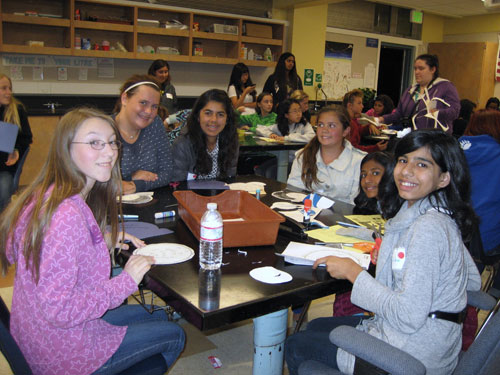 Girls Achieving in Non-traditional Subjects (GAINS) is a 12-year-old program of the Santa Clara Unified School District to encourage young women to seek careers in business, engineering, math, science, and technology—fields traditionally dominated by men. The fall kickoff event for GAINS was an evening of star gazing for the 173 middle and high school girls, more than 150 family members, and many volunteers who facilitated the November 1 event at Peterson Middle School.

The first stars of the evening to shine were four women from the aerospace industry: Amy Cooprider and Lindsey Webster with Lockheed Martin in Sunnyvale and Diane Wooden and Yvonne Pendleton with NASA Ames Research Center in Mountain View.

You never know what will influence a person’s career choice. Yvonne Pendleton, Ph.D., an astrophysicist and director of the NASA Ames Lunar Science Institute, showed the first group of young women to attend her 30-minute presentation a Jetsons cartoon that motivated her to study space. She was also influenced by the moon landing in 1969.

“What can you think about doing in your life? My career is really fun. Go after something you’re going to be excited to do. Take the hard road wherever your passion leads you. You’re going to be glad you did that. Then you’ll have a lifetime that is so fun,” says Pendleton.

Lindsey Webster has long blond hair and California beach girl looks and enthusiasm. She also has a degree in engineering from California Polytechnic State University and has worked for five years in missile development at Lockheed Martin. Webster showed a video and photos of two projects she has worked on: a 500-pound missile hover test for the Multiple Kill Vehicle Program and a space-based infrared satellite.

“After I joined GAINS in the eighth grade, it sparked an interest I would not have thought of otherwise,” says GAINS alumna Mia Hernandez, a June 2012 graduate of Wilcox High School who is now an environmental science major at De Anza College. “Through GAINS I was able to find out different internship opportunities for girls in science. GAINS has been definitive in creating my passion for my future.”

“GAINS is making the non-traditional become traditional for women. A lot of program speakers have been the only female in their discipline,” says Hernandez, now a member of the alumnae group that started this past summer.

During the last hour of the star party, the young women sat around classroom tables, chatting and making star finders before heading out into the cool evening to look through telescopes and identify constellations.

“GAINS is a fun program for any girl. I learned that you can choose any career you like,” says Peterson eighth grader Rahma Din, who plans to be a veterinarian.

“You learn about a lot of different kinds of careers, and you do things with people with similar interests,” says Wilcox High School freshman Melanie Kent.

“I don’t know what I want to be yet, so being in GAINS helps,” says Wilcox sophomore Hailey Arenson.

“GAINS is a phenomenal program for all girls. It helps you think about college and know where your path will lie after college, and you meet life-long friends,” says Santa Clara High School freshman Gabriela Guillen.

“I definitely recommend for parents to encourage their daughters to participate in GAINS,” says parent Margie McBride, whose daughter, Raquel, has participated for three years.

GAINS, which is financed entirely by community contributions, is open to all interested young women in the Santa Clara Unified School District.