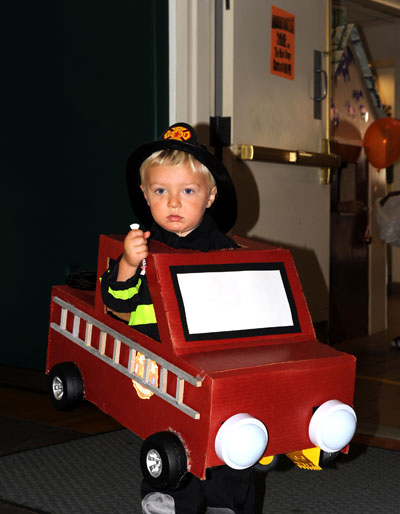 You’re traveling through another dimension, a dimension not only of sight and sound but of mind; a journey into a wondrous land whose boundaries are that of imagination — Next stop, Santa Clara’s YAC Halloween Zone.

FADE IN on a small boy wearing a police uniform, Ryan, who surveys the scene. His eyes try to take it all in, but there is simply so much to see. So much activity. So many people talking, laughing and having fun.

The fun and the crowds spill into other rooms of the building and even outside. Looking for a reassuring or a familiar face in the crowd proves to be fruitless. From across the room, Ryan catches a glimpse of a cheerleader, Isabel, standing next to someone shorter. “Maybe that’s her sister,” he thinks.

Now all he sees is firefighter Kyvan, standing near the door, helmet pushed back, truck at the ready. But the image of the cheerleader doesn’t leave Ryan’s mind as he struggles to spot her again, to get another look, to see if his eyes had deceive him or if he simply imagined what he tries not to admit he saw.

Finally, he spots her again and realizes that something’s not quite right about her. As he watches, she staggers across the stage, her arms held up at an awkward angle, and her head lolls to the side. He realizes he was right. She’s a zombie. A Zombie Cheerleader. And her sister is really, really blue. Not just her arms and legs, but every inch of her face. She’s a Smurfette.

Perhaps for you this scene is something out of the Twilight Zone. But not for Ryan. As a five-year old, dressed as what most boys say they want to be when they grow up, everything made perfect sense.

Ryan was at the Walter E. Schmidt Youth Activity Center’s (YAC) 15th Annual Children’s Halloween Party. For the crowd of children and parents alike, the Oct. 31st event was like a familiar friend who never fails to astonish, delight and thrill.

Every room of the YAC offered something special for the kids – from carnival games to movies, to coloring, to music from Teacher Sean, to the Pumpkin Walk. Throughout the center Trick-or-Treat booths gave out candy, making knocking on the door of a strange house a little less scary.

The Costume Contest let the children show off onstage. As in past years, police and firefighters were the more popular costumes, followed up by princesses, space rangers and cheerleaders – both the living and the zombie types.

Judging by the smiles, it would be difficult to know who enjoyed the afternoon’s activities more: the volunteers who helped make the event a success, the parents watching their children trick-or-treating in a safe and friendly place, or the children themselves. Many parents say that the Santa Clara YAC party was the only trick-or- treating their children would do.