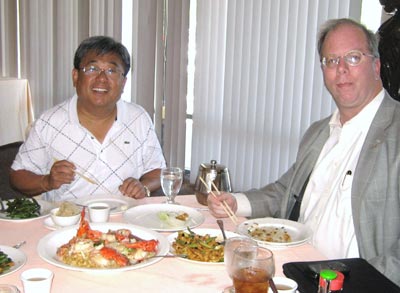 With Santa Clara community supporter and restaurateur Frank Chang, it’s impossible to separate the man from the cuisine. Chinese cuisine to be exact. Chang is the founder of the popular China Stix Restaurant, 2110 El Camino Real, which he has owned since 1988.

“I came here for the American dream,” says Chang, who was born in Taiwan. “I wanted to be a successful and good citizen, supporting my family and helping people. It’s not an ambitious dream.”

“In Taiwan, parents encourage kids to get their master’s degree or doctorate in the U.S. So since I was a kid, it was my goal to come to here and pursue a better life,” says Chang, who graduated from Santa Clara University with an MBA degree in 1985 and became a U.S. citizen in 1987.

Chang met his wife, Betty, born in Canton, China, at a restaurant in San Carlos where Chang worked as a busboy. As a family, they strived to realize their dream of owning a successful Chinese restaurant. When China Stix opened, Chang’s parents, who had preceded him to California, worked in the kitchen, making green onion pancakes, handmade noodles, and pot stickers.

“I feel sorry for my kids. The restaurant business is not a family life. Every holiday we worked hard. But now they appreciate our efforts,” Chang says about his son, Lawrence, and daughter, Ashley, both college students.

When China Stix customers returned from trips to China lamenting that “the Chinese food is better in the U.S.,” Chang knew that they just hadn’t been taken to the right restaurants. Eight years ago, he started leading culinary tours of China, using his extensive contacts to ensure great dining experiences. He has arranged tours for his restaurant customers, professional chefs, and even his golf friends. In 2010, he led eleven tours.

Chang accepted the invitation of renowned chef Martin Yan, to join him in starting a culinary school near Hong Kong in Shenzhen, China. Visiting chefs from the U.S. and other countries learn the nouvelle (new) Chinese cuisine at the school.

Beyond the sweet taste of professional success, Chang enjoys serving his Santa Clara community, and it has drawn him closer to his chosen homeland.

“I think the volunteer system is the biggest U.S. resource—everybody putting in to help,” says Chang, crediting Andy Ratermann, President of the Santa Clara Unified School District Board of Education and a long-time customer of China Stix, with getting him involved in community service.

“Andy influenced me a lot and introduced me to people. I’m minority here. I don’t have much access to mainstream. Chinese hide their feelings inside. After I got to know Andy, I started to reach out to the community. He made me aware of community needs.”

Chang supports the Rotary Club and PTA. He volunteered his services to make all arrangements for and lead Cabrillo Middle School students on a spring 2010 tour to Changsha, China, even helping them raise trip funds. Another student trip is being planned for April 2012.

“My advice to new immigrants is to get more involved with your community. Try to help people if you can. Don’t be shy with your kindness and love,” says Chang.

“I pretty much love what I do. It’s hard work, but to see customers leave with big smiles, that’s a big accomplishment,” he says. “Enjoy your life while you can. Enjoy good eating!”