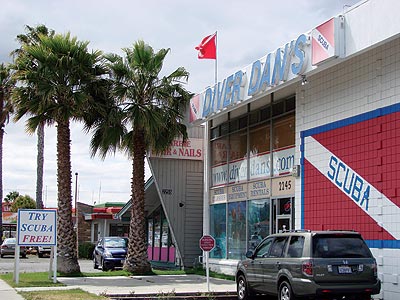 Nearly three-quarters of the Earth is ocean and when the depth of the ocean is taken to account about 99 percent of the living space on this planet is ocean space and yet less than two percent of the population has physically seen what lies below the surface of the water.

Those who have seen the beauty beneath are Scuba divers and according to Dan King, owner of Diver Dan’s in Santa Clara, anyone can get certified in as little as two weekends.

“The weekend accelerator is our most popular class,” said King. “The first weekend all we do is class in the pool. The second weekend is the ocean dives in and the ocean dives are two dives each day and four dives for the weekend.”

“We also offer for people who are on the fence, and not quite sure if they want to do it, a chance to try Scuba for free. Every Friday night at 6 o’clock and this is a big one because we have the onsite pool. It’s almost every Friday and there are exceptions if there is a holiday over the weekend. All we ask is that you show up on time and we’ll try to get you out of here by 8 o’clock. It’s a chance to just try it and demystify it because there are a lot of misconceptions about it.”

As a former aerospace engineer, King picked up his love for Scuba while in college. “Going through college my aspiration was to always be an astronaut like anybody who grew up in the 60s and 70s. The space program was always a cool thing to do and something to aspire to and that’s why I went and got my bachelor’s and master’s degree in aerospace engineering. That was always the goal” said King. “But, of course, it being so competitive, I never quite made it. Along the way, one of the requirements was to be certified in Scuba as a prerequisite. They want you to be used to the idea of breathing on a self-contained apparatus and on top of that flight experience, flying. I have a commercial pilot’s license and am an instructor. In fact, I did that prior to this as well. So I was doing all the prerequisite things and along the way I just fell in love with diving and this is definitely a new direction and something I love to do.”

Prior to his purchase of Diver Dan’s, King was the chief instructor for the previous owners for 10 years. He is one of 400 course directors in the world. “Course directors are the instructor trainers. They’re the ones who make dive masters instructor trainers.” Above the retail store at Diver Dan’s is the instruction area. Lining the upstairs walls are certifications King has received. Basically, he can do anything related to diving and he insists on having the best staff available. “All of our staff instructors are master instructors. All of my customers-slash-students get the very best instructors that are available…Most of the diplomas and all of these certificates are out here, not so much to motivate the customers, but to motivate the instructors to continue their education. The more you know, the safer you are.”

Even though King is adamant about education equaling safety underwater, Scuba is one of the safest activities out here. According to King, the accident rate of diving is equal to that of bowling. He is also is very clear about letting people know that there is nothing to be afraid of. King states that the two biggest misconceptions about diving are the breathing apparatus and sharks. Breathing is done as you normally would and there are only two known sharks to be dangerous to humans. “There has never, if you research it, been an unprovoked attack on a Scuba diver,” said King. He also mentions that in the free Scuba classes on Friday nights students have the opportunity to go underwater with a regulator to see that breathing underwater is just as easy as breathing on land.

King says anyone over the age of 10 can learn to dive, but has one warning. “The only danger I can tell people is that if the become a certified diver every vacation for the rest of their life just got affected because once you get certified as a diver, you will want to include diving in every vacation,” said King.

Diver Dan’s at 2445 El Camino Real and is the only Scuba store in the area with an indoor, onside pool and training area and the rental department is one of the largest in the country. The 14,000 square foot facility offers swimming lessons, diving instruction, first aid and CPR for divers, and various specialty courses such as rescue diver, underwater photography and technical diving. For more information visit, www.diverdans.com.

Getting to Know Community Supporter and Restaurateur Frank Chang