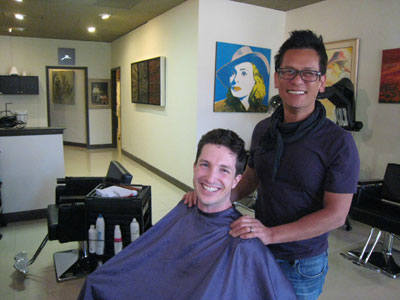 Tired of the same old hair style? Need to hide your roots? Want fancy hair for your prom or wedding? Get a makeover at Scotia Salon located at 1241 Franklin Mall. The salon is spotless, with modern décor and the owner’s art work hanging on the walls. Hair services available here include cuts, color treatments, perms, chemical straightening, blow out and updo styling, and hair extensions. A massage therapist and esthetician is also here to offer massages, waxing, and facial services.

“I’ve always liked to do hair because I like to make people happy and prettier,” says Scott Do, owner of Scotia Salon.

Since the new Scotia Salon opened in 2010, Do has been faithfully serving his clients, many of whom have followed him from his old salon located on Pruneridge Avenue and Winchester Boulevard to the new location in Franklin Mall. Do has received extensive training from a variety of institutions, including his former beauty school based in Santa Clara, Vidal Sassoon, and Yosh for Hair, formerly located in Palo Alto. A veteran of the beauty industry, Do has been styling hair for women, men, and children for 21 years.

“A lot of women come here,” Do says. “Many people say to me, ‘make me over.’ People often tell me I could do whatever I want. So I get to be creative but make sure what I give my clients matches their personality and lifestyle.”

Available at the salon are books, magazines, and color samples for Do’s clients to look at so they can reflect on which styles might work for them. Do is comfortable creating both traditional and modern hair styles. He also does hair for formal occasions, such as weddings and proms.

“With weddings, I’d need to do a trial first,” Do says. “I also need to get to know the personality of the bride in order to give her what she wants.”

Fred Langen has been one of Do’s clients for about ten years.

“The work Scott does is really good,” he says. “I’ve been to other barbers who give me an old man’s cut, which is not good if you’re concerned with your looks. With Scott, I don’t feel like I’m getting an old man’s cut. [When Scott works on me] we have a good time together. He’s fun to be with.”

Patti Miller, another client of Scotia Salon, has known Do for over 15 years.

“Scott’s very friendly, and he’s willing to give you ideas on what to do with your hair,” she says.

A native of Vietnam, Do came to the United States in 1984. He worked in a high-tech job before deciding he wanted to pursue a career in hair design. Having lived in Santa Clara since 1990, Do says that one of the many things he appreciates about the city is its cleanliness.