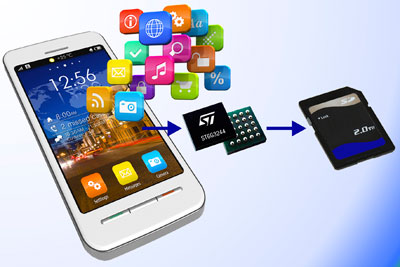 If you were asked to name the technology company with the most impact on your daily life, you might answer Google, Intel, Microsoft or another consumer technology company. You probably wouldn’t answer, ST Microelectronics (STM). Yet there are probably few moments of your waking life that you don’t have a device with STM technology close at hand.

A global company, STM has its Silicon Valley presence in Santa Clara. “It’s important to have people in Silicon Valley,” says Santa Clara-based Paul Bromley, STM Director of Strategy. “Our office is north of 101. It’s a perfect location central for all of our customers and for visiting all Silicon Valley companies.”

From the smartphone that you consult for your calendar and today’s headlines, to the GPS in your car that gets you places on time, to the set-top box on your TV set that lets you watch Dancing With the Stars on your schedule, STM systems-on-a-chip (SoCs) perform the magic that is so much of modern life; advancing the state-of-the-art for more intelligent and, at the same time, more power efficient chips that are directly responsible for smaller, lighter, smarter, and more secure devices.

Headquartered in Switzerland, the $10.4 billion company has been in the business of chip design, power controls, and set-top box design for more than 30 years. The company reaches into so many different markets because its technology breadth enables STM to develop all the system components, explains Bromley. “We do that in many markets.”

Among STM’s notable advances are rotation and orientation technologies that keep your smartphone’s screen always pointing the right way. “The largest problem for mobile devices is screen orientation,” says Bromley.

If you’ve ever tried to use the positioning system on your phone to find somebody inside a mall, you’ll appreciate one of STM’s newest offerings. Last month the company debuted technology that significantly increases indoor positioning accuracy to within feet – an order of magnitude better than can be achieved using Wi-Fi alone. STM’s indoor positioning system will not only help you find your friends, it will be a valuable help for emergency services.

STM is also a leader in consumer electronics and entertainment. Its video chips play a critical role in mobile video. If you’re catching up on back episodes of the Daily Show on your smartphone while waiting on line, it’s pretty likely it’s thanks to an STM chip in that smartphone.

So what’s on the horizon for the future? A new generation of medical devices that are less intrusive and more capable, says Bromley. “This year you’re going to see the ability to have sensors for health and fitness like pedometers. Imagine: tracking distance, time, and heart rate using a simple device like a wrist band.”

Another place you’ll see STM technology in the future is in diabetes care. “A noninvasive band-aid can incorporate a miniature insulin pump with six days of insulin,” Bromley reports.

Get Fabulous Hair at Scotia Salon