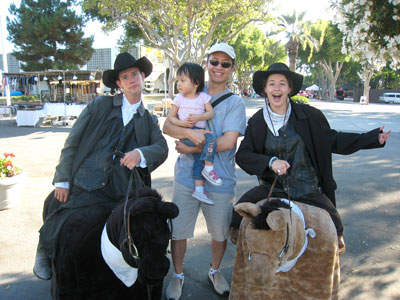 Vida Anderson has been coming to the Santa Clara County Youth Fair since she was in junior high school over 50 years ago.

“We used to get half a day off on Fridays to come to the fair when it was held in September,” recalls Anderson, who is volunteering at the fair’s information booth this year.

“The first time I came to this fair was in 1948,” says Wayne Mabie of Mabie Farms, another fair volunteer. “Back then, everything used to be held in tents. Now there are buildings. [One of my favorite] things about this fair is seeing all the people who come here.”

Indeed, there are a lot of people who have walked past the gates of the fair. An estimated 60,000 people attended this year’s Santa Clara County Youth Fair, held from August 4-7. Vibrant activity marked a typical afternoon of the four-day fair. Children flashed smiles during their pony rides. Screams of excitement came from the carnival area. In the livestock exhibits, pigs and other farm animals peered curiously at their spectators. Visitors strolled through the crafts area to marvel at the decorated cakes, tie-dye designs, eye-catching quilts, and original three-dimension art sculptures.

Stephanie Lopez tended to her children near the petting zoo and pony rides. This San Jose mother was at the fair with her family.

“I’ve been coming to the fair my whole life,” Lopez says. “My children like to look around, ride the ponies, and go on the rides.”

“It’s a project of mine to send cards to soldiers overseas,” says Cormier, hoping to have a thousand cards made during the weekend of the fair. “My dad has been in the U.S. Air Force. I want my cards to encourage soldiers overseas.”

“Josey Wales” and “Rattlesnake Jake” were two fair entertainers from Fables of the West, a cowboy-themed comedy and entertainment ensemble. Riding their life-sized plush horses around the fair grounds, the entertainers exuded the boldness and charisma expected of cowboys and cowgirls in the Wild West. Fair visitors also appreciated their pleasant demeanor.

“[Being an entertainer] is my second nature,” Josey Wales says.

“Josey and I are hams in real life and now we get paid to be hams,” Rattlesnake Jake says.