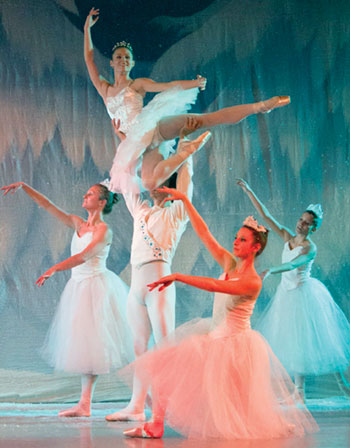 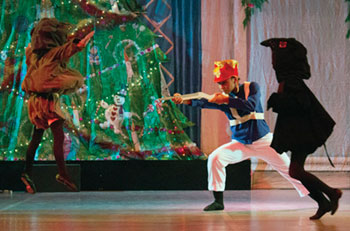 As visions of sugar plums dance in the heads of children across the world this holiday season, many will experience the joy of seeing the Sugar Plum Fairy pirouette her way into their hearts during productions of The Nutcracker. The Santa Clara Ballet Company, known for treating the city to this tradition, put on its 40th annual performance at the Santa Clara Convention Center Dec. 14-15.

Similar to years past, the mom-and-pop production uses Santa Clara Ballet School students for the children’s roles and professional guest artists and soloists for the principal performances. In 2011, three generations of the Reyes family danced on stage (founder Josefa Villanueva-Reyes, her son Andre Reyes and his daughter Rowan Allegra Reyes). After a sabbatical last year, Andrew Reyes was back. Villanueva-Reyes, once again, played the role of Frau Silberhaus, Andre Reyes performed as the Mouse King, and 17-year-old Rowan Allegra Reyes reprised her role as the Sugar Plum Fairy, much to the delight of audiences.

Mikhail Guz also reprised his role as the Russian Trepak. In one of the most recognized segments of the famed ballet, Guz enchanted the audience, as he had in the past, with his high-energy, athletic performance. Guz actually did triple duty this year, tackling the roles of Herr Silberhaus and the Nutcracker Prince in all performances except the Saturday matinee.

Returning for her fourth season was Russian-born Dasha Maximovich who danced as a Snowflake, Spanish Chocolate, Arabian Coffee, and Rosebud in the Waltz of the Flowers. 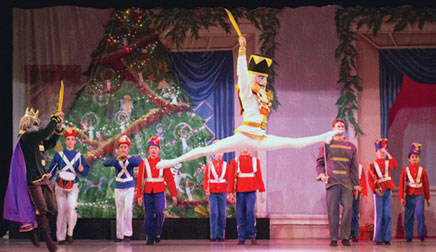 New principal performers included Sean Sessions, a graduate student with Pittsburgh Ballet Theatre, as the Cavalier; David Fonnegra, the artistic director of Peninsula Ballet, as the Snow King; and Santa Clara-native Danielle Dunmire as the Snow Queen and Spanish Chocolate. She also split the role of Rosebud with Maximovich.

As an added bonus, Kyle Fox, a member of Festival Theatre Ensemble – the group that performs Shakespeare at Santa Clara Unified’s Full Circle Farm and at the Los Gatos Shakespeare Festival – joined the ballet company this year as one of the party guests and The General during the battle between the Mouse King and Nutcracker Prince.

The addition of Fox, parents and friends of the ballet company who dance in the party scene, dedication of the students and dancers, and the hours of time and effort put in by volunteers to make The Nutcracker possible, are reasons why the Santa Clara Ballet Company’s version is so popular and such a staple among the holiday traditions in Santa Clara. It truly is to showcase the dancers and bring just a little bit of holiday cheer to families who may not have the opportunity or the funds to see the larger performances in San Jose or San Francisco. The quality rivals its more expensive counterparts, and the joy of the ballet will continue to live on for generations to come in Santa Clara.

Arts & Entertainment
Author Diane AndrewsPosted on February 24, 2016
By its very title, “In the Eyes of the Beholder” invites the viewer to interact and find personal meaning in the 68- X 74-inch...

Arts & Entertainment
Author Carolyn SchukPosted on June 17, 2021June 16, 2021
For half a century at least, Santa Clara supported performing groups with deep ties to the City — even in years when the City had...
SPONSORED