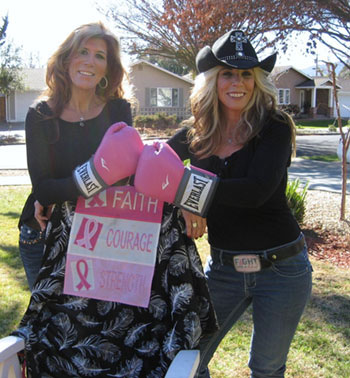 Blonde and petite, Trish O’Neill carries herself with confidence and swag that make her seem taller than five-foot-three inches. Her designer cowboy boots and black cowboy hat with a silver Celtic cross further add to her stature.

People turn their heads to look when O’Neill and her older sister—by just one year—Mare (pronounced Mary) O’Neill walk by. With their similar good looks and outgoing personalities, the sisters are sometimes mistaken for twins. Through thick and through thin, they are best friends.

Looking at O’Neill, it seems incongruous that she has 18 years of experience as an undercover detective for Santa Clara County, most recently focusing her efforts on sexual abuse cases.

At 41, O’Neill has it all, including—she would be the first to tell you—breast cancer, which she was diagnosed with on April 17, 2013. Who would have guessed?

After all, “what does cancer look like?” asks O’Neill, who grew up in Santa Clara, the youngest of five children. She discovered the tumor herself. And now, after six surgeries, beginning with a double mastectomy, the divorced mom is in “the fight of my life” not just for her sake but for the sake of her sons, Dominic, 14, and Matt-Matt, 11.

O’Neill’s fight against cancer—wearing pink boxing gloves and with Mare and their mom, Mary Jo O’Neill, at her side—includes a bold venture. After early retirement as a detective in October 2013, O’Neill and her sister launched an apparel line they branded “Cowgirlz Surf.” Their motto, suggested by Dominic: Hope Faith Surf.

The Cowgirlz Surf line reflects their love of country music, the ocean, and surfing. A few months ago, O’Neill learned stand-up paddling in the cold Pacific off the beach at Capitola, and she now paddles a sleek, aqua-colored board sporting the Cowgirlz Surf logo.

“Clothing is our way of expressing our authenticity, our uniqueness,” says Mare. Their initial line of men and women’s clothing includes logo T-shirts and hoodies.

The Cowgirlz Surf venture is more than a living legacy to ensure financial support for O’Neill’s sons. A percentage of the company profits on certain items will go towards establishing a foundation to offer supportive services to children who have family members diagnosed with cancer.

“People can’t handle cancer. Nobody talks about cancer, including with kids, but I do. And so do our children,” says O’Neill, referring also to her sister’s two daughters, Olivia, 12, and Sophia, 9. “When I share my story, it gives others the courage to share theirs.”

O’Neill takes off her right boot and sock to show off a pink ribbon tattoo on her ankle, her first tattoo. Her mom got one at the same time.

“I embrace cancer as a gift not a death sentence,” says O’Neill. “I’m not working now, so I have received the gift of time to spend with my kids and family. I don’t take things for granted. I’m a better woman now.”

O’Neill flashes her broad smile and gives her sister, who redecorated O’Neill’s house for her as a surprise, a goodbye hug. She offers some of her homemade chocolate chip cookies to go.

View the Cowgirlz Surf clothing line and contact O’Neill at www.cowgirlzsurf.com. Drawing on O’Neill’s background as a detective, the dynamic sisters also do presentations, at schools, for example, on a variety of topics, including bullying.

Business
Author AdminPosted on February 4, 2015
Opening up at a location familiar to many, JX Cuisine celebrated their arrival in Santa Clara with a ribbon cutting on Jan. 15. Located...