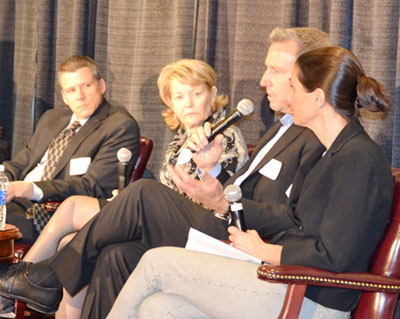 With a number of major developments underway or in the planning stages, Focus on Santa Clara-Outlook 2014 provided a glimpse into the vision developers have for Santa Clara moving forward.

Moderated by Santa Clara Convention Center and Visitor’s Bureau CEO and President Steve Van Dorn, four prominent developer-related panelists spoke on the plans to incorporate mixed-use applications in the City, in particular the Grand Boulevard on El Camino Real and the City’s Northside.

The biggest challenges facing developers include building more on less property, the lack of available land, keeping up with demand from consumers (for more green-friendly features – such as EV charging stations, more sustainable living features and a push for more walkable communities) – more evolved and thorough planning processes, CEQA challenges and employee transportation.

When asked why they continue with major projects in Santa Clara, the reasons cited by the panelists included the City being pro-growth and business-centric, with adequate housing and a general plan providing ample opportunity for turning El Camino into a great place. “NVIDIA wouldn’t stay in Santa Clara if we didn’t think the City couldn’t accommodate our future needs and plans,” quipped O’Brien.

Though Sobrato currently has over 3.5 million square feet of office space in Santa Clara but only 500 apartment units, Hollister said Sobrato plans to add several more apartment projects with the City’s changes to the General Plan. He later said he felt the best option to maintain adequate affordable housing was to maintain housing supply to keep with demand. This was in response to a question to the panelists in regard to the future of affordable housing in the absence of RDA funds. Hollister, and other panelists, emphasized the need for housing that satisfies a younger workforce, primarily developments featuring better walkability. 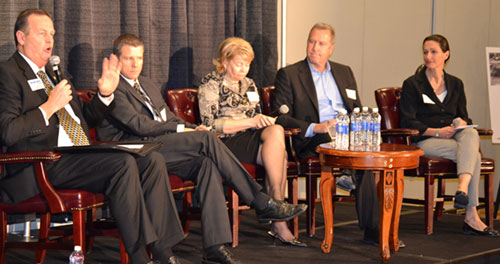 The lone questions from the audience addressed the need for entertainment options. Breeze said she didn’t see any major ideas on the table at the moment, but the vision for El Camino by the City and the Grand Boulevard Task Force will make El Camino a viable option for such possible developments. “Some really exciting ideas near the stadium will soon come forth,” said Van Dorn, telling the audience to “stay tuned,” to see those developments unfold.

Focus on Santa Clara-Outlook has been a program of the Santa Clara Chamber of Commerce & Convention-Visitors Bureau for over 15 years. According to the Chamber’s VP of Membership & Programs Denise Harris, the purpose of the program is to focus on topics that are important to the economic vitality of the City as well issues that businesses are challenged with. According to Harris, attendance was up 25 percent over last year’s event while attendance in 2013 was up by 16 percent over the prior year’s event. Approximately 100 attended the event.