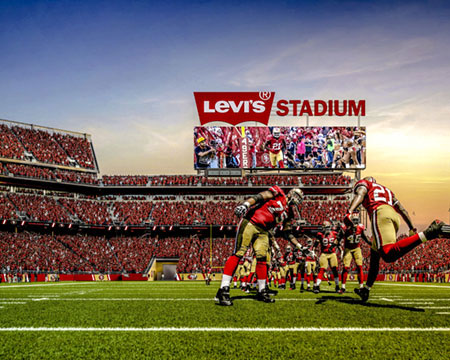 While the 49ers Faithful have been on their feet rooting for the red and gold, including the final game at Candlestick Park, behind-the-scenes the 49ers and the Santa Clara Stadium Authority have been busy, bustling to obtain sponsors, partners and major events for the new home of the 49ers, Levi’s Stadium.

Construction has been moving swiftly, recently surpassing the three-quarters completion mark in late December. With 900 workers on-site each day, approximately 90 percent of the 48-foot tall and 200-foot wide video boards have has been installed while the “ribbon board” going around the bowl has been installed. In addition, a 17-foot tall and 86-foot wide “Levi’s Stadium” sign topped the south video board.

Work is progressing on the Hall of Fame with exhibit installation scheduled to start within two weeks. Construction has begun on the three pedestrian over-crossings, while four of the 25 elevators are operational.

Behind-the-scenes, a flurry of major events have been secured for the 68,500-seat stadium, including Super Bowl 50 in Feb. 2016, WrestleMania 31 in March 2015, the Fight Hunger Bowl in Dec. 2014, a nationally-televised Cal/Oregon football game and the inaugural event, an MLS soccer match up between the San Jose Earthquakes and Seattle Sounders on Aug. 2, 2014.

In addition, several founding partners have been announced, most recently, Santa Clara’s Intel, the “preferred technology provider.” Efforts will be made to integrate Intel solutions and products for client, server, embedded, and security technologies inside the stadium. In addition, Intel will have exclusive branding and naming rights to the northwest corner of the venue, the “Northwest Plaza,” which will now be named the “Intel Plaza.” The area will feature a fan experience zone where fans can connect and communicate using the latest products with Intel Inside.

Intel joined a stellar list of stadium partners and sponsors, including Anheuser-Busch, BNY, Brocade, Levi’s, NRG Energy, PepsiCo, SAP, Sony, SunPower and Violin Memory. Bud Light will be the official and exclusive malt beverage partner with entitlement of the stadium’s fan deck. PepsiCo (Pepsi, Frito-Lay, Quaker, Gatorade and Tropicana) will be the exclusive non-alcoholic beverage and snack provider and will brand the North fan deck, which will sit on the uppermost level of the stadium and span the length of the end zone. Yahoo! will be the exclusive online sports content, social networking, and photo and video sharing partner, with Flickr, and Yahoo! Sports fantasy football integrated into the stadium experience and will receive entitlement and branding rights to the fantasy football lounge, and its two adjacent viewing platforms, located in the stadium’s suite tower.

Centerplate will serve as concessionaire for the stadium. It was also recently announced that acclaimed chef Michael Mina will manage two, high-end restaurants at the stadium, Bourbon Steak & Pub (http://www.BourbonSteakandPub.com/) and Michael Mina’s Tailgate, an exclusive game-day, membership-based dining experience.

The Santa Clara Stadium Authority launched a fan brick program, giving fans the opportunity to purchase commemorative bricks – which will be located within the stadium’s Fanwalk at Gate A in the Northwest Plaza. There are two brick styles to choose from with varying price points. Net proceeds will go toward the construction of the stadium. Visit www.levisstadiumfanwalk.com for more information.

For more information on the stadium or to view live construction, visit http://www.levisstadium.com/.

Op-Ed
Author Robert HaughPosted on July 22, 2015
As Super Bowl 50 inches closer and closer by the day, the City of Santa Clara has been gearing up in an array of...

Op-Ed
Author Robert HaughPosted on November 21, 2012
Inching closer to completion, another major milestone was reached in the rapid progress of the construction of the new 49ers stadium in Santa Clara,...
SPONSORED