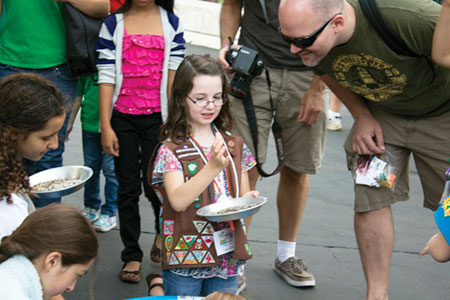 To help promote the park’s newest attraction, Gold Striker, Ducky Derby was themed around the Gold Rush, giving girls the opportunity to pan for gold and ride the roller coaster before the park opened to other guests. Girl Scouts and their families were able to purchase a duck for $20 as part of the event, which helped raise funds for Girl Scout programming. 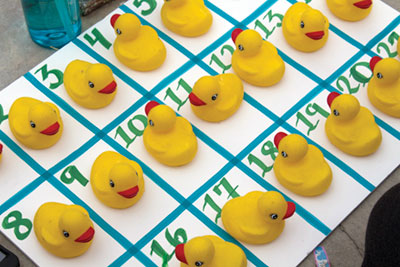 “My husband is a big supporter of girls, he has a daughter, and he really loves to support Girl Scouts so it’s a big deal for him,” said Hussain. “He really loves supporting any activity that promotes science, math and adventure for girls…[our daughter] is getting the most amazing experience.” 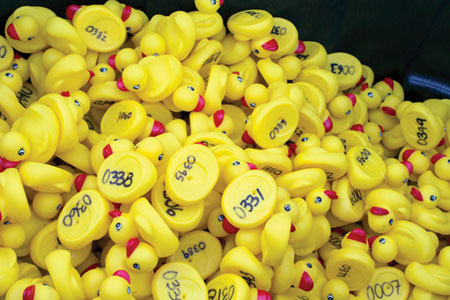 Last year, the ducks raced through Boomerang Bay’s wave pool, which resulted in multiple duck disqualifications and sloppy finishes. This year, the organization changed it up and had the ducks race around Castaway Creek. “Our ducks couldn’t train hard enough for the wave pool,” said Troop Leader and event organizer Clara Chin.

Just after 10:30 a.m. the ducks dove into Castaway Creek to “warm up” for the main event. Within minutes, the ducks were off and on an adventure, traveling along the route and fighting for a first place finish. As racers came around the corner and made their way toward the finish line, the girls began cheering in hopes that their voices would help push their duck to victory.

A total of $5,644 was raised at the event. Visit www.girlscoutsnorcal.org for more information.