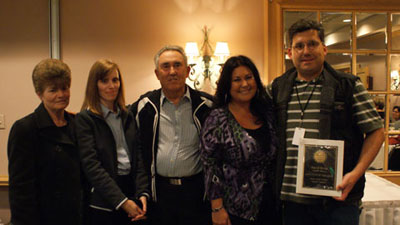 David Brum thought it would be another typical day in May at his job as a senior computer technician for the Santa Clara Unified School District. So he found it was odd that his mother asked him to put on a nice shirt on a day when he thought he’d just be carrying out his regular duties for the school district, including managing a projector during a teacher and employee recognition event.

The reason why Brum’s mother wanted him to wear something nice was because she was in on a secret. At the event, Brum was recognized as the 2011 Classified Employee of the Year for the Santa Clara Unified School District. Surprise guests at the event included two of Brum’s best friends, his girlfriend, his parents, and his sister.

“I was surprised when I found out that I won the award,” Brum says. “I received a plaque and flowers. I gave my mom the flowers.”

Brum, a native of San Juan Bautista, has been working in the technology field for many years. About twenty years ago, he started out as a manager for Saratoga’s Montgomery Ward’s sporting goods section and then later managed the store’s electronics department. Realizing how the company needed to make a consistent profit even when dissatisfied customers returned the electronics they purchased, Brum began repairing the machines people returned so the store could resell them as refurbished items.

“That’s how my career started,” Brum says. “I fell in love with working with machines. After I left Montgomery Ward, I worked at Comp USA where I got more tech training.”

In addition to taking online courses, Brum took courses and earned certificates in a variety of technology-related subjects at De Anza College. Brum’s experience in technology helped land him a job with the Santa Clara Unified School District as a computer technician.

“When I talk to someone with a problem, I try to identify what’s causing the problem,” Brum says. “When I listen to people, I find out if an issue is driven by a computer problem, if the user literature wasn’t written properly, if it’s a software or hardware issue, or if the user is doing something wrong. Once I identify the problem, I do the research required to fix it. Listening is an important part of my job.”

Brum has accomplished many things during the 10-plus years he has worked in the Santa Clara Unified School District. For example, in three and a half months, he was able to transfer 800 computers from the district offices to the schools and help teachers set up the computers. Years ago, he won several awards for hosting the best Web site for the district’s classified employees’ union.

“The most rewarding part of my job is working with technology users and helping them accomplish their job,” Brum says. “Knowing I can make someone work more efficiently is satisfying to me. If I can make someone’s job easier, I’m doing my job.”

During his spare time, Brum likes to garden and set up seasonal decorations. For Halloween this year, he will convert his home in Salinas into a haunted house and collect donations from house visits for a private charity.

Bon Appétit at the School Cafeterias of SCUSD