Sunnyvale Department of Public Safety Posted on POSTED 10:37 AM, November 5, 2019

Daniel Williams has been arrested in connection with two armed robberies that occurred on Oct. 28 in the 600 Block of Iris.

On Monday, Oct. 28, the Sunnyvale Department of Public Safety (DPS) received a report of a man who was robbed at gunpoint. Around 6:40 a.m. the victim was walking to his vehicle when he was approached by a subject armed with a black handgun, the subject demanded his personal belongings and then fled on foot.

Later that evening, at approximately 10:25 p.m., Sunnyvale DPS received a second call from a group of three individuals who were robbed at gunpoint in the same manner. 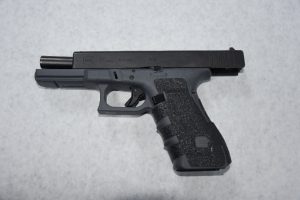 Sunnyvale Public Safety Officers immediately began investigating these two incidents. On Nov. 1, officers contacted Daniel Williams in the area of Fair Oaks Avenue and McKinley Avenue and found him to be in possession of stolen property belonging to one of the victims.

A search warrant was obtained, and investigators located a handgun and additional stolen property.  Williams was arrested for the armed robberies and transported to Santa Clara County Jail.

Public Safety
Author Santa Clara Police DepartmentPosted on August 21, 2018
The Police Blotter highlights a partial list of incidents in the City and is distributed on a weekly basis. The Blotter provides the date,...

Public Safety
Author Erika TownePosted on March 27, 2019
A 4-year-old boy is in the hospital with serious injuries after he fell from the fourth-floor balcony of his home in Sunnyvale. Captain Jim...

Public Safety
Author Santa Clara PDPosted on February 3, 2017
The Police Blotter highlights a partial list of incidents in the city and is distributed on a weekly basis. The Blotter provides the date,...
SPONSORED