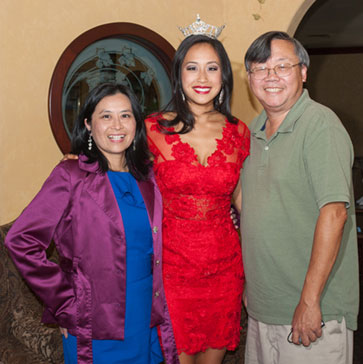 2013 has been a busy and successful year for Crystal. She was named Miss Silicon Valley in a January pageant hosted by the Miss Santa Clara Auxiliary, Miss California in June and has been promoting her platform of mentoring young women in STEM (Science, Technology, Engineering and Math). On September 2, Crystal leaves for Atlantic City to compete in the Miss America pageant. Pictured here are Crystal Lee (center) and her parents Wendy and Wellman. (Not pictured is Crystal’s sister, Jasmine).

Fans who want to send words of encouragement and support can send emails to mary.mccaman@gmail.com or post on the Miss California Facebook page.