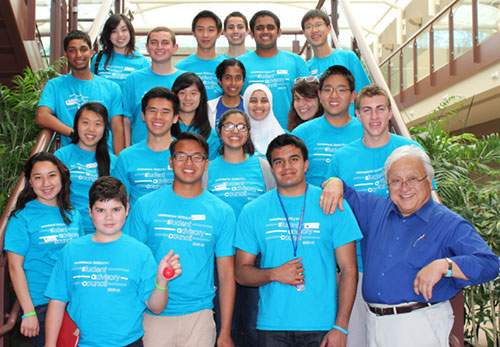 High school students who participated in the Student Advisory Council on April 28th at Harker School got to tell everyone that they saw Congressman Mike Honda practicing his Zumba dance moves. At the afternoon conference, hosted by the congressman, students gave presentations and facilitated activities to demonstrate their knowledge and thoughts surrounding the theme, “Eat Well, Sleep Well, Move Well.”

“I’ve been impressed with the caliber of the work, research, and presentations here,” Honda said in a speech delivered to the participating students and other attendees. “I’m putting what I learned [at today’s conference] into a package to send to the First Lady. One of the people in this country who has really taken on the issue of obesity is the First Lady.”

Honda is referring to First Lady Michelle Obama’s campaign to combat childhood obesity in her program, Let’s Move. So it makes sense that the topics the students presented on spotlighted ways someone could achieve a healthier mind and body.

“We gave the audience two options; they had to choose to run or swim,” Villalpando said. “People walked over to one side of the room if they chose to be walkers, and to another side of the room if they wanted to be swimmers. After everyone made their choice, I [announced] the better choice. The better choice is swimming because when you swim, you work out more muscles. Water has 800 times more resistance than air.”

“I’m part of the research committee that took the survey and analyzed the data for the presentation on diet,” said Nhada Ahmed, a Santa Clara resident who attends Notre Dame High School.

“I’m the only freshman on this council,” he said. “It’s been a successful conference. Everyone is enjoying it. It’s important for kids to know that we can interact with one another instead of sitting at home to be a couch potato.”

Although Honda jokes that he is the perfect shape of a circle, he acknowledged that listening to the students’ insights made him think of how he could take better care of himself. In an interview after the conference, the congressman shared that for dinner that night, his choices would reflect a healthy diet. He would have a small bowl of rice or leftover noodles with eggplant, Asian yams, bok choy, tofu, and saba, which is Japanese for mackerel.

“People have to be critical consumers,” Honda said. “The government needs policies that keep people healthy. We need to step in to stop a market from driving a product for the bottom line [just to make money.]”

Sharing an example of his work ethic, Honda said he voted to pass a state law to prohibit people from smoking in public places.