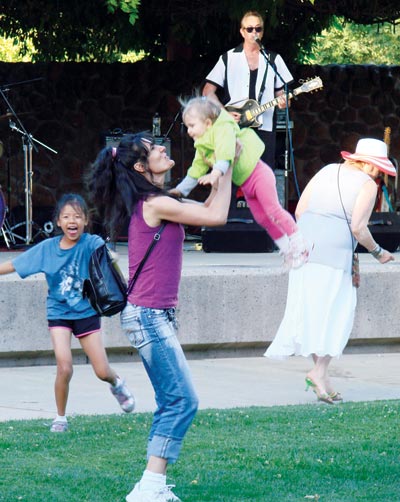 Santa Clara’s Concerts in the Park kicked off with a bang on Wednesday, June 22 as Central Park welcomed The Dave Crimmen Band and their rockabilly musical style. The band performed many of their own tunes as well as some hits from musical legends Elvis, The Everly Brothers and Ricky Nelson. They even tossed in the Ritchie Valens’ classic, La Bamba, to keep the party going and concert-goers dancing. Throughout the show, Crimmen asked musical trivia questions, like what was the B-side of Ricky Nelson’s 1961 hit Travelin’ Man (answer: Hello Mary Lou) for a chance to win a Dave Crimmen Band t-shirt. Concerts in the Park continues tonight, Wednesday, June 29 at 6:30 p.m. with a performance by Mission City Opera.