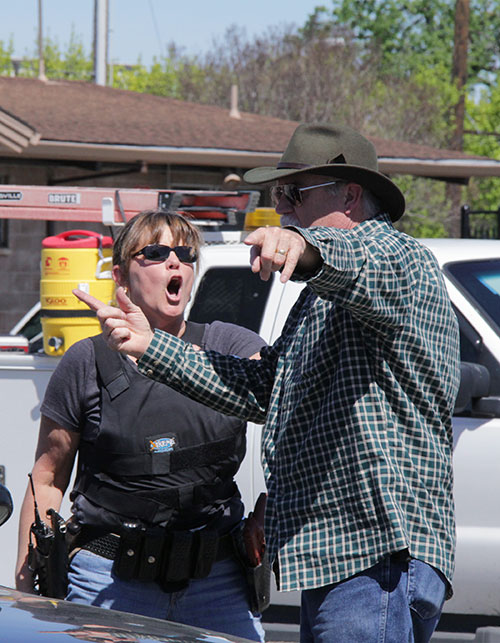 As a reporter for the Santa Clara Weekly and Santa Clara resident, I’ve enrolled in the Citizens’ Police Academy (CPA) class offered by the Santa Clara Police Department. Partway during the session, a full day exercise is offered to the students called CPA Saturday.

CPA Saturday starts off with students going to either the police range or a simulation. At the range, students were introduced to the various firearms used by the department and we were given the chance to fire them. It’s a strictly controlled environment to not put the students or others in any sort of danger.

The simulation took place at the City’s Corporation Yard. We donned bulletproof vests and utility belts, were issued a radio and fake handgun, and were given an introduction to a police cruiser–we learned how to use the radio and turn on the siren and various lights. A previous class took students through some of the steps involved in making a traffic stop.

Three students and a police officer were assigned to a police car and one group at a time went into action. All scenarios involved a report of a suspicious car, performing a traffic stop, talking to the driver and dealing with the event as it unfolded. A first for all the students, myself included, was just getting familiar with the simple task of getting out of the car. Critics can justifiably point out that the lack of basic training as well as the lack of time given to allow students a chance to get used to their new surroundings means the exercises are slanted and guaranteed to fail.

The critics would be right and wrong because after the first run through, you realize the real purpose of the exercise is not focused on the training (or lack of) but on how quickly things can go wrong and why traffic stops are considered among the most dangerous activities for an officer.

Each stop involved Police Department volunteers playing a variety of roles. In one scenario, a passenger gets out of the car and approaches the officer. In this case, the officer was me. However due to a distraction, I didn’t notice him until he was about 10 feet away from me. If this wasn’t a simulation, I could have been in very real danger. Reasoning with him to get back in the car didn’t work and, because outside the classroom encounters with the police are designed to have the police win, the situation escalated and the officer has to remain in control. In this scenario, my escalation was to yell loudly and request him to get back in the car. However in another scenario, my escalation led to me being shot and possibly killed if the handguns weren’t fake.

The purpose of the day was to safely drive home the idea that police face a variety of dangers in the course of their day. As a driver, being pulled over when you’re certain you haven’t done anything wrong is frustrating, but from an officer’s viewpoint, it’s also a situation that can put their lives, and the lives of others, in danger. It’s a difficult concept to grasp, but one that sent me away from the day with a greater respect for what officers do during their day.

Future updates concerning the CPA will be in the Weekly. For information about the CPA, please visit the Police Department’s website, www.SCPD.org. Select Community and then Citizens’ Police Academy.

Amount of Crime Decreased in April