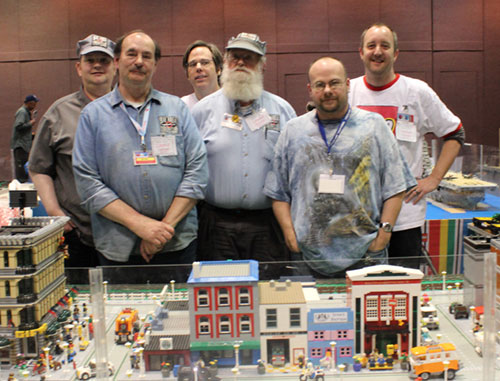 When Bob Spivock was a kid, the technological gadgets kids have today weren’t invented yet.

“The big toy of those days was the electric train; from 1910 to 1960, I would say that was the toy of choice for every boy,” Spivock recalls. “I didn’t get my first train set until I was 13 years old. It was the best gift I ever had. I still have it today. And today, you also have as many girls as boys who are interested in trains.”

Spivock never grew out of his childhood love for trains. Today he is the senior advisor to the Toy and Model Train Expo, a convention that took place at the Santa Clara Convention Center March 9-10.

“This is the first year that the show is open the whole time to the public,” Spivock says. “In the past 39 years, admission was for members only on Saturday, before it opened to the public on Sunday. This year would mark the 40th Toy and Model Train Expo that the Train Collectors Association has hosted. About 20 previous expos have taken place at the Santa Clara Convention Center.”

Train enthusiasts and vendors set up tables and elaborate displays where model trains zoomed by on the tracks. One exhibit featured a detailed city and rural landscape made entirely from Lego pieces.

“This display is 25 feet by 20 feet, and is five feet thick on the inside,” says Bill Ward, a member of the Bay Area Lego Users Group, and its subgroup, the Bay Area Lego Train Club. “All of our club members contributed to making this.”

Russell Clark, also part of the groups that Ward belongs to, points out different areas of the fantasy Lego world while two trains briskly run through it.

“This is a farm, with different crops and animals,” Clark says, and points to the cows, horses, and farm hands. When a train breezed past, the cows turned their heads in the moving train’s direction.

“This giant cathedral blends the residential area into the downtown area,” says Clark, pointing to a tall stone-looking establishment. “We have five city blocks in the downtown.”

Hot spots in the downtown area include an automobile lot, and a fire station, restaurant, movie theater, Starbucks, and giant Stay Puft Marshmallow Man from Ghostbusters.

David Pfeifer, a prosthodontist and retired U.S. Navy serviceman, was selling items and tabling for the Carquinez Toy Train Operating Museum, based in Crockett.

“There’s a lot of history behind trains,” Pfeifer says. “They represent our childhood memories. My favorite kind of train is the Lionel steam train.”

Richard Hofmeister, employed at an electronics company, is another train hobbyist. Model trains and parts were spread out all over his tables, with a bargain bin placed off to the side.

“I’m here selling things that I find as a collector,” Hofmeister says. “I think it’s important for people to have something fun to do in their lives to escape the pressures they face.”

Visit http://www.trainexpo.org/ for more information about the Train Collectors Association.

Community
Author Suzy PaluzziPosted on February 29, 2012
The Harris-Lass House on 1889 Market Street in Santa Clara is rich with local history. Known now as The Harris-Lass Historic Museum, it was...

Community
Author David AlexanderPosted on August 17, 2016
More than 1,000 people gathered in Franklin Square Friday to enjoy food, drink, and of course, music as part of the city’s Street Dance....

Arts & Entertainment Community
Author Larry SacksPosted on March 16, 2016
The 2016 rendition of Showtime played last weekend to everyone’s delight. Although the heavy rains kept some patrons away on Saturday, the show proved...
SPONSORED